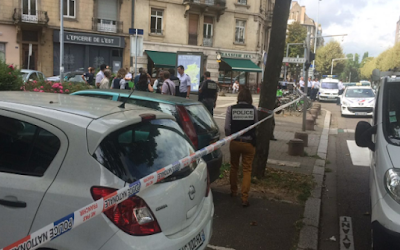 A rabbi has been stabbed by another of those persons with mental health issues. For some unconnected reason the lone assailant allegedly uttered ‘Allahu Akbar’ during the episode, which took place in the French city of Strasbourg. The incident has been widely reported, but it seems one prominent news organ hasn’t yet noticed the incident..... 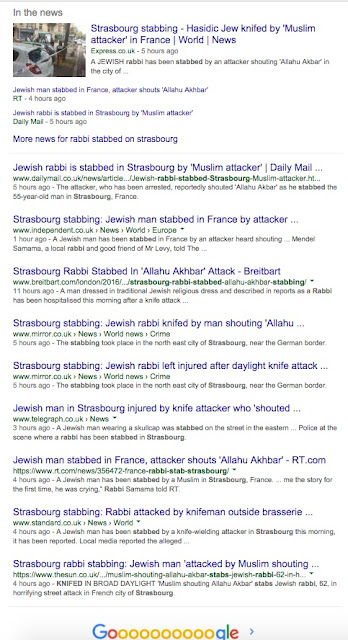 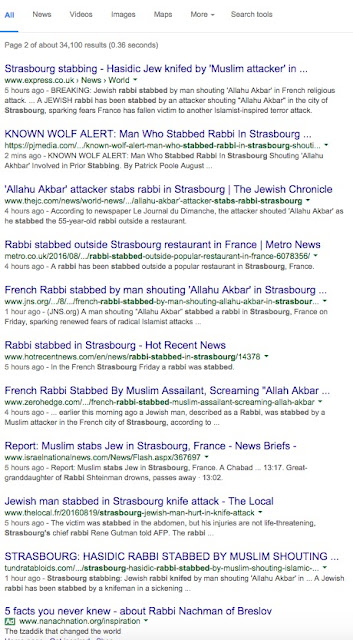 .........Ah, hang on. The BBC has reported it, here.  ("Three hours ago")
But don't worry, it's not terrorist-related and no anti-Semitic motive has been established.

"According to the police source quoted by AFP news agency, the suspected attacker has a history of mental illness.

Alexandra Gonzalez, crime journalist for French digital TV channel BFMTV,tweeted (in French) to say that the injured man's life was not in danger.
She also quoted a source close to the inquiry as saying that "no anti-Semitic motive had yet been established".

Of course it wasn’t the BBC that decided that the motive has nothing to do with Islam, it was French spokespersons. ("A source close to the inquiry". )
However, the BBC’s reporting does seem to have taken these reassurances at face value rather more readily than, say, the OMG Daily Mail and, say, the Telegraph.


Rabbi Gutman said the suspect had previously attacked a member of the Strasbourg  Jewish community in 2010.

That attack was also on a man wearing a skullcap, police told AFP news agency.


The attacker, who stabbed his victim and beat him with an iron bar, suffered from psychiatric problems and spoke to police of his belief that Jews were running the world and were to blame for all his woes.

Isn’t it a remarkable coincidence that the attacker’s psychotic episodes happened to be directed at men wearing skullcaps? What are the chances of that happening?