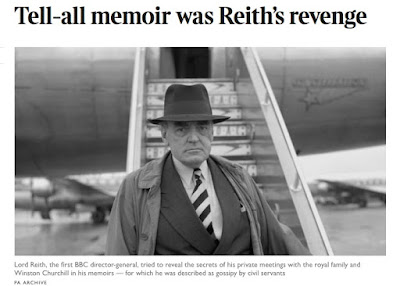 As the founding father of the BBC, Lord Reith has long been regarded as a model of moral probity and rectitude.

However, newly released documents show that he tried to reveal the scurrilous secrets of his private meetings with the royal family and Winston Churchill. Clement Attlee, the prime minister, intervened to scupper the publication of Reith’s memoirs, branding them “objectionable” and in “bad taste”.

The term “Reithian” is used today to describe the high-minded standards set down for broadcasting by the first BBC director-general. Yet in private papers civil servants poured scorn on his abilities, describing him as gossipy, vain, peculiar and a failure who was “not designed for teamwork”.

Hahah!
“gossipy, vain, peculiar and a failure who was “not designed for teamwork” a bit like me, then, apart from the eyebrows. I’m starting to warm to him.

Or maybe not.
This Telegraph article from 2006 -  a review of his daughter’s book “My Father”  shows Reith to have been a megalomaniac and a complete bastard.

‘...it was a surprise and a delight, one of the best family memoirs I have read - honest, funny, sharp, well-written but never bitter - although a person other than Marista would have had plenty to be bitter about.’

It says here that he was a great admirer of Hitler:

It was later revealed that Reith was a great admirer of Adolf Hitler. On 9th March 1933 Reith wrote "I am certain that the Nazis will clean things up and put Germany on the way to being a real power in Europe again.... They are being ruthless and most determined". Later, when Prague was occupied, Reith wrote: "Hitler continues his magnificent efficiency."

Marista Leishman wrote about her father with a good deal of humour, but under the circumstances ……what else could she do?

A fan of the BBC has responded to the Times piece as follows:

“I'm interpreting this article as "See, the BBC was rotten from the start'. Bonuses all round at Murdoch HQ.”

Others, not necessarily all fans of the Murdoch Press,  might simply interpret the article as "See, the BBC was rotten from the start”
Posted by sue at 13:20