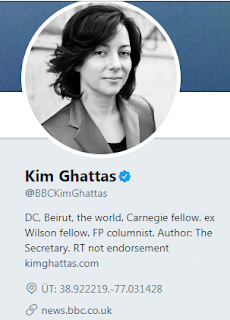 You may (or may not) recall that 'viral' video of the feisty Palestinian girl who repeatedly slapped and kicked a couple of Israeli soldiers late last year. The Israeli soldiers responded with admirable professionalism, taking it all on the chin and moving away to diffuse the situation. The girl was arrested later.

In such a conflict, people take sides. For some, the video showed the bravery of the Palestinian girl. For others it showed the admirable professionalism of the Israeli army.

It's possible to see the girl, Ahed Tamimi, as both an aggressor and as a victim. She was certainly aggressive towards the Israeli soldiers and obviously considers herself to be a victim of the Israeli forces who her family accuse of invading their property. Others say that she's actually a victim of her father because her father has been exploiting her from before she was even a teenager, filming her provoking Israeli soldiers from around the age of 11 - pushing her fist in their faces, slapping them, kicking them, all on camera. (The poor lass has become something of a celebrity as a result.)

If you stand back a bit, I think the 'Others' have a point. What normal father would repeatedly put his daughter in such situations (over a six-year period), again and again? (Not that she ever came to any harm at the hand of the Israeli army.)

His intention was obvious: either make a heroine or a martyr of his poor daughter. (Does Ramallah have social services?)

Her father, as you might have guessed, is an activist and his extended family includes convicted terrorists.

That said, I've been following this story closely and one of the peculiar features of it is there's a hot dispute about Ahed's age. Google it for yourself and you'll see that 'prestigious' media outlets are divided over whether she's 16 or 17.

Some pro-Israel sites contend that she's actually 18, though I think they're misreading earlier reports and that she really is actually either 16 or 17 - and most probably 16. (I've dug into the matter!).

Only the wildest anti-Israel propagandist sites (and even next to none of them), however, claim that she's only 15....

Have you fact-checked that, 'impartial' Kim of the BBC?

As you can see from her first tweet (below), 'BBC Kim' is wholly trusting of Ahed's father and his "poignant" letter.

The man is an activist. Mightn't she consider that he's engaging in propaganda (as he surely is)?. Why just trust his word, unless she wants to trust it?

This wasn't an impartial tweet from 'BBC Kim Ghattas', and nor are the others. (Is she an activist too?)

Anyone who watched that video and saw the Israeli soldiers being stoical and professional towards Ahed as she slapped and kicked them again and again will think BBC Kim's depiction of what happened - "Ahed Tamimi, unarmed, slapped a gun toting Israeli soldier who was in her back yard" - somewhat lacking in terms of the full and unvarnished truth. Take "gun toting" as a choice of words. Not exactly an impartial one, is it? And Haaretz, who Kim cites, have also published pieces headlined Ahed Tamimi and Her Family Aren't the Palestinian Saints You Want Them to Be (a piece Kim Ghattis didn't link to).

And then, in the final tweet, 'BBC Kim Ghattas' goes on to express a extremely non-neutral opinion.

If I hear Kim Ghattas reporting on anything to do with the Israeli-Palestinian question ever again I will write to Fran Unsworth and ask her to bring Ms Ghattas to book. 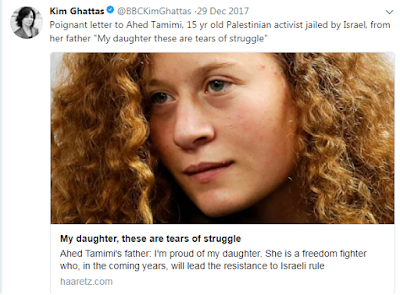