Let’s take Emily Thornberry. It is said that Emily, or Lady Nugee, as they prefer to call her on Guido’s website, is positioning for Corby’s job. No, surely not! But worse things happen at sea. 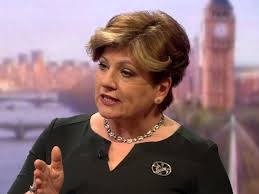 Admittedly she is thought to have eclipsed old Steptoe when she stood in for him at PMQs, but how hard is that?

Isn’t she a bit of a square peg in a shitround hole? I mean her demeanour is not that of your bog standard Labour M P. Unlike your standard, labourite, glottal-stop estuary English (gettin’ on down wiv the workin’ class) favoured by all Labour MPs during the Blair - Miliband era, Emily talks a bit posh, with her slightly Sloaney vowels and a hint of mid-Atlantic drawl; the sort of accent Beatrice and Eugene from W1A might pick up at the Golden Globes. She begins all her sentences with “I think”, confident that we care. At her most irritating she will blink and half-close her eyes, a look often given by the very smug after successfully making A Very Important Point.

On the Marr show she said:

Hmm. And I thought Trump was a businessman. Oh well.

Watching the insufferable Meryl Streep was not pleasant. Nicola Sturgeon may not be my favourite politician, but she’s smart and articulate in a way that knocks poor Lady Nugee’s performance into the proverbial cocked hat.

Yippidee dooda, The Big Questions is back!! When you get your first glimpse of the ‘front row’, your immediate  challenge is to see how quickly you can spot the regulars. Today there were only two. Angela Epstein and Abdullah al-Andalusi.

The debates were a little lacklustre, but when they turned their attention to the troubling question of the persecution of Christians I was relieved to see that no-one even mentioned Israel.  Thank goodness I didn’t have to write an infuriated blogpost about that, for once. Here’s a list of the offending top 50. 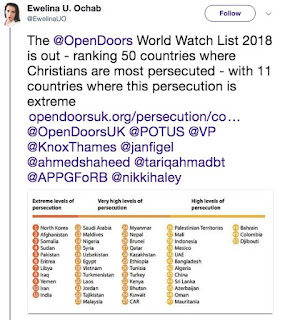 Put that in your pipe, Lucy Winkett, the Rev Stephen Sizer and Sarah Montague.

The Sunday Politics has lost its sparkle since Sarah Smith took over from Andrew Neil. I wonder if she gets equal pay? My attention wandered till Barry Gardiner came on. Garry Bardiner. Barry Gardiner painstakingly explained, as if to a class of severely mentally disadvantaged infants, the Labour Party’s policy on the single market and the Customs Union. I think he’s saying we want the best possible deal. We will be leaving the EU by the way. Let me be clear. What we want, what people voted for, what we’re trying to do, each “what” enunciated with a kindly but slightly patronising Barry Gardiner whoosh. When challenged about Jared O”Mara’s and John McDonnell’s obnoxiously misogynistic remarks  a steely look came into his eyes that sent a chill down my spine. Gentle Barry has a nasty side.

Ukip! Poor old Henry Bolton. His girlfriend made him look enough of an idiot even before she said all that stupid stuff.  I don’t think even Nige could salvage what’s left of the party. But you never know what’s around the corner. Now I’m off to watch the Queen.
Posted by sue at 20:01