Here's a guest post from loyal commenter Loondon Calling to lead you interestingly into the weekend... 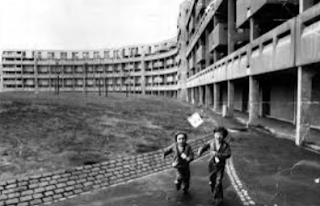 There is a case to be made for the ITBBCB? being renamed ATBBCAGB? - Are the BBC and Guardian Biased? After all, they seem to share a single brain. That’s my excuse for bringing this recent Observer/Guardian article ‘A blueprint for British housing in 2028’ by Rowan Moore to ITBBCB? readers’ attention.

First of all, the sub-heading …. ‘Imagine this: in two years, riots force the government to transform planning, design and building’… sounds like the output of a warped imagination - even a call to arms, especially from an architecture critic. Aren’t they expected to celebrate the ‘firmness commodity and delight’ of architecture? This would be the sitting Conservative Government he is referring to?

The essence of the article deals with the age-old theme of state-sponsored development of housing stock. Within Moore’s model, eco-friendly, zero carbon dwellings can be built in low rise comfortably-sized clustered arrangements of streets or squares with ample green spaces, in car-free zones with good walking routes or new public transport connections. Families and community life would be at the heart of the concept. Rowan Moore has to his name a book title ‘Slow Burn City: London in the Twenty-First Century’, published in March 2016. Clearly the choice of title ‘Slow Burn City’ is a bad one, but as this book came out fully twelve months before the Grenfell Tower fire, it might have been thought appropriate at the time. Here is the blurb:

…London has become the global city above all others. Money from all over the world flows through it; its land and homes are tradable commodities; it is a nexus for the world's migrant populations, rich and poor. Versions of what is happening in London are happening elsewhere, but London has become the best place to understand the way the world's cities are changing.
Some of the transformations London has undergone were creative, others were destructive; this is not new. London has always been a city of trade, exploitation and opportunity. But London has an equal history of public interventions, including the Clean Air Act, the invention of the green belt and council housing, and the innovation of the sewers and embankments that removed the threat of cholera. In each case the response was creative and unprecedented; they were also huge in scale and often controversial. The city must change, of course, but Moore explains why it should do so with a 'slow burn', through the interplay of private investment, public good and legislative action.
Fiercely intelligent, thought-provoking, lucidly written and often outrageously and uncomfortably funny, Slow Burn City is packed with fascinating stories about the physical fabric of London in the twenty-first century. But by seeing this fabric as the theatre of social and cultural struggles, Moore connects the political and architectural decisions of London's enfeebled and reactive government with the built environment that affects its inhabitants' everyday lives. In this urgent and necessary book, Moore makes a passionate case for London to invent new ways to respond to the pressures of the present, from which other cities could learn….

From Moore, here we have an example of BBC/Guardian groupthink. To harp back to recent posts about Mark Easton’s view that London is the UK and the UK is London, it becomes clear from Moore that London’s identity in his eyes is also an example for the world to copy. How arrogant.

There is no single answer to the housing crisis. At its heart of the problem is the paradox that until corporate house-building firms can see a sure-fire profit in a development, then sites even with PP will remain undeveloped. Making land available and granting PP does not in itself produce more houses. This is the way in which house-building works. Developers wouldn’t flood the market in a way that might drive down house prices. Profit motive and the market dictate whether or not development progresses. This paradox is especially acute in London, where the scarcity of available land leads to houses that are unaffordable to all but the very rich. Equally, in rural areas, villages and market towns throughout the UK, house building fails to address the issue of affordability.

Far from being the beacon of success as Moore would have us suppose, London’s experience should serve as a dire warning to other cities in the UK and elsewhere. By extending the London model to the rest of the UK, Easton “there’s plenty of land available” and Moore are condemning the rest of the country to a dystopian future where only the rich and privileged can survive in comfort. There is a bitter irony here whereby the London leftist elite have themselves become the rich and privileged in direct contradiction of their would-be left wing socialist credentials. Most are attracted to work in the arts, journalism, PR, publishing, broadcasting, political lobbying, charities or the public services. In contrast, others who have made their money in private enterprise or by other means have no such ambitions to overturn the status quo of home ownership, or the buy-to-let market. A precarious balance exists between the two schools of thought ie pro and anti property ownership - of independence or dependence - broadly equivalent to the split between left and right. However, it is the trends which will affect this balance that we all need to address.

The www.london.gov.uk website tells us that the population of London is set to increase over the coming decades rising from 8.2 million in 2011, to:

Here is a salutary tale, an example of a mass-housing scheme built with socialist-minded good intentions to provide larger scale housing close to a city centre for working people and their families, but which failed spectacularly:

The Hulme Crescents development close to Manchester city centre, which was being constructed during the 1970s was designed as a series of high-rise crescent shaped blocks built from the most uncompromising grey concrete. Many old terraced houses, identified for ‘slum clearance’, but which had housed close-knit communities, had been demolished to make way for this estate. Entire streets with their corner shops and pubs, symbols of a strong community, had been compulsorily purchased and then simply swept away, leaving residents who may have referred to themselves as ‘locals’ without anywhere to call their own. Housing managers reported that in consultations, they found that re-housed families wanted to be located away from their now destroyed community, and people they may have known as neighbours. They didn’t like what was on offer, but they had little choice in the matter. The construction techniques which built them had seemed to promise mass housing on a scale and at a pace which would finally eradicate the scourge of the slums.
These designs were probably the manifestation closest to Le Corbusier’s Modernist dream, Ville Radieuse, to be built in the UK. From my student accommodation I could see these monstrous beasts during their construction. Prevailing opinion, even as the development was taking place, was that the construction techniques were outdated, the model of high-rise concrete towers was discredited.The scheme Architects, Wilson Womersley had an impressive history in this type of building. The Hulme Crescents were conceived the best of modern social housing, designed to house some 19,000 residents.
The Crescents’ system-built engineering was a disaster. The blocks were erected too quickly and their construction inadequately supervised, and corners were cut. Problems of condensation emerged from poor insulation and ventilation. Vermin spread rapidly through the estate’s ducting. The Crescents, named after famous architects, Adam, Nash, Barry and Kent, were intended to recreate the fine proportions and lawned frontages of Bath, Buxton or Harrogate. Womersley said: ‘We feel that the analogy we have made with Georgian London and Bath is entirely valid’.
Found in the end to be totally unsuitable for families to live in after the death of a child falling from a balcony, the Crescents became ‘for adults only’. This in turn led to poor occupancy levels, alienation between the residents and their landlord, and eventually a complete breakdown. In 1984 the Landlords stopped accepting rent from the scheme, in a policy of retreat and abandonment of their asset, thus allowing anyone who wished to live there to occupy the homes rent free, and with utility services still connected. Changes in the power base of the Manchester City Council had labelled the Hulme Crescents concept as ‘too paternalistic’. The Architects Journal described the scheme as: ‘Europe’s worst housing stock’.
The dystopian look of The Hulme Crescents held some sort of attraction though, and acted as a magnet to a counterculture, groups of travellers, drop-outs, punks, photographers, artists, poets, musicians et al. The design with its concrete architecture, interconnecting walkways, with few through routes gave a fortress-like feel to the place.
As post-war modernism at its most brutal, The Crescents represented many of the aspirations that Le Corbusier may have held dear. He said: ‘Space, light and order, those are the things that man needs just as much as bread and a place to sleep’.
During the 1980s an informal vibrant community emerged from the dereliction of the Hulme Crescents. There was The Kitchen, an illegal nightclub which had been made from three knocked-through flats. A space was made that was unplanned in the architectural sense, being of random size and shape. If more space was required, there was no need for seeking permission from anyone, a hammer was all that was required. Graffiti on the walls declared: There ain’t no Government like no Government.
The lack of ownership enlivened this disparate community with their own anarchic lifestyle. The drab appearance of the grey concrete was enriched by graffiti and street art. A second club, the PSV Club, was set up by a group of Afro-Caribbean Public Service Vehicle (PSV) workers. Reputedly, in an atmosphere of lawlessness, the ceilings in the club were bullet-marked.
By the mid 1980s Hulme had its own clubs, arthouse cinema, and its residents had developed their own style of dress. Hulme had its own Carnival. Amongst the artists who passed through are Nico, who, through her association with Warhol’s Velvet Underground, would have a direct link back to the pop-art movement of the 1960s, the Manchester poet Lemn Sissay, Kelzo, whose graffiti coloured the grey walls of Hulme, film critic Mark Kermode, Mick Hucknall, and Alain Delon.
In what once was hailed as the future for local authority housing, this scheme, being the largest single housing development in Europe, had problems that were so bad that the huge scheme was demolished in 1991 - a mere 19 years after it was constructed.
Is this the multiculturalism that Moore sees for London and the UK - on the edge of lawlessness, anti-capitalist, non-inclusive, but vibrant, self-governing, and capable of nurturing talent in music and art? Moore needs to tell us of his reasons for imagining ‘in two years, riots force the government to transform planning, sign and building’. On the face of it, he seems to be advocating lawlessness as the first steps towards a solution to the housing crisis.
Posted by Craig at 20:59