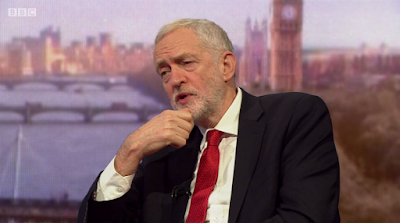 There's no post-The Andrew Marr Show bun fight today on Twitter. Maybe Rob Burley is tiring of the fray. I wouldn't blame him if we was. He recently tweeted:

I'd hazard a guess that he had someone very specific in mind as Dan Hodges has been vigorously pursuing their very heated quarrel from last week again with a barrage of less-than-amicable tweets attacking this morning The Andrew Marr Show:
*******

The relevant section of the Jeremy Corbyn interview began like this:

AM: Let me move on to a big foreign issue. You've been very reluctant to condemn the Government of Iran. Can I read you what Amnesty international has said about Iran?

JC: I think, if I may say so, you are spending too much time reading The Daily Mail, do you know that?

AM: I promise I'm not! I was reading a poster about an event celebrating the Iranian revolution at which you spoke.

AM: You spoke at a demonstration, or you're on the poster...

JC: I was on a delegation to Iran in the company of a number of other MPs, including Jack Straw. I spent the whole of that time, that delegation, discussing two things: the nuclear issue and human rights. I raised human rights at every conceivable opportunity during that. I think that Iran and the nuclear deal is good and welcome but the issues of human rights abuse in Iran - of executions, of imprisonment...

JC...Flogging, beheading, is totally wrong. Therefore there has to be human rights demands made on the Iranian Government, which I make.

JC: A very long time ago I did some programmes for Press TV. I ceased to do any programmes when they treated the Green Movement the way they did and I also, on all of those occasions, made my voice clear about human rights abuses because I want to lead a government that puts human rights at the centre of its foreign policy, no matter how uncomfortable it is, with any government around the world and I have consistently raised those issues with every world leader I've met, including President Xi.

Jeremy Corbyn was certainly bending the truth when he said his work for Press TV happened "a very long time ago". He did it from 2009 to 2012, so it's only 5-6 years ago.

Plus the Iranian Green Movement protests and brutal crackdowns went on throughout the time (2009-12) he worked for Iranian TV.

And as for suggesting that "on all of those occasions" he made his voice "clear" about Iranian human rights abuses, well, apparently not (according to Victoria Freeman):

Corbyn also appeared to claimed he raised Iranian human rights abuses in these appearances. He certainly did not on the one I watched in its entirety. In fact, the Press TV appearance I watched in full (where Corbyn was filling in for George Galloway) was focused 100% on Israeli abuses. No mention of Iranian abuses.

And he praised Iran and glossed over its human rights record as recently as 2014. He talked of "the inclusivity, the tolerance and the acceptance of other faiths, other traditions, and other ethnic groupings within Iran". (Human Rights Watch doesn't agree, particularly over the treatment of Baha'is and Baluchis in Iran).

Doesn't Dan have a point then (however rudely he expressed it)? Shouldn't Andrew Marr have been able to take Jeremy Corbyn to task over this?

P.S. Others are on the case too, including Guido Fawkes and Steerpike. Guido says, "Marr really should have pinned him down on this, Jezza is straight up telling porkies…".