I had to grin near to the start of Jim Naughtie's Trump-focused documentary on Radio 4 this afternoon, Is Trump Remaking America?.

Very alert regulars may remember this ITBB post from November 2016 (though I'll forgive you if you don't): 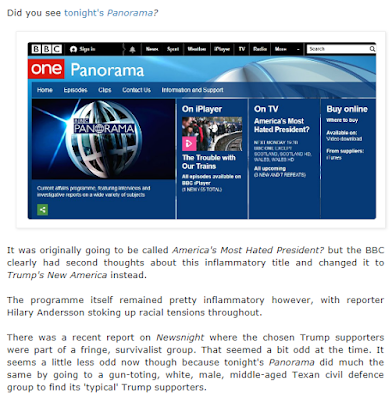 Well, can you guess what sort of 'typical' Trump supporters Jim began with today? Oh yes, once again it was rootin tootin countryfolk attending "a gun and knife show" with guns of every type, plus barbed-wire-covered baseball bats and samurai swords.

At least the BBC is consistent!

And then it was onto Uncle Jim's commentary, which was about as 'non-aligned' as Cuba during the Cold War.

It began with: Trump's "lurid brand of politics", "an unforgiving political discourse", "a time of conspiracies", "the American zeitgeist is wild", "Trump is the emblem of an attitude unleashed". And that was just its first few sentences...

...and on it went down the usual routes, with lots about racism, anger, melodrama.

Jim may think of himself as nobly impartial but this wasn't anything like impartial reporting. [Ed - You'd have to be severely cloth-eared (no offence!) not to hear that.] His disdain for and disapproval of Donald Trump oozed through in virtually every sentence and choice of word he uttered.

I won't say any more about this programme other than to say, if you hate Trump you'll love it and (knowing the way people are) also more-likely-than-not think it wholly fair and reasonable...

...just as (I bet) James Naughtie thinks it was wholly fair and reasonable too.

But it really wasn't wholly fair and reasonable. It was strongly biased.
Posted by Craig at 16:51