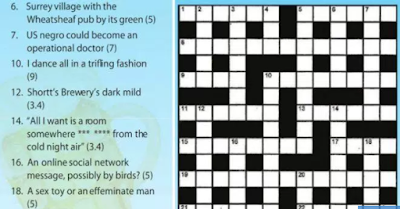 Firmly in 'you couldn't make it up' territory...

A lead story on the BBC News website tonight, though slipping down the rankings gradually as the evening progresses (perhaps, as reality dawns on BBC journalists?), is:

Yes, this BBC-headlining scandal concerns a couple of crossword clues by the Derbyshire branch of the Campaign for Real Ale...

And, yes, a crossword by the Derbyshire branch of the Campaign for Real Ale has been major BBC headline news this evening!

I kid you not. Such things are evidently top news with BBC online editors these days...

....at least if the apparently inexhaustible ranks of the Twitterati rouse enough of a silly, furious Twitterstorm about it....

The offending clues, which brought about the usual mad Twitter frenzy (duly reported by the BBC), are: (a) ‘US negro could become an operational doctor (7)’ and  (b) ‘A sex toy or an effeminate man (5)’.

Hilariously, the Daily Mail (of all media sites) went one step further than the BBC (and, as far as I can see, anyone else) by employing asterisks to 'disguise' the offending word (and got roundly mocked in 'the comments' for so doing):

Now, I'm not bad at doing cryptic crosswords and immediately got ‘US negro could become an operational doctor (7)’ (hint: think of anagrams for 'US negro' which mean 'medical practitioner') but, maybe because of lingering middle-aged naivety and/or conservatism, I'm still (stupidly) struggling with ‘A sex toy or an effeminate man (5)’, and none of the newspapers (**** 'em all!) are giving away the answer to that. I'm at serious risk of not sleeping tonight unless I solve that second clue. Don't tell me though!

Meanwhile, the Campaign for Real Ale (nationwide) has apologised for someone somewhere in their organisation posting such traumatisingly offensive crossword clues.

Incidentally, did you know that 'Plush gold age' is an anagram of 'God help us all!'?
Posted by Craig at 22:22