"Although the claims lacked evidence..." 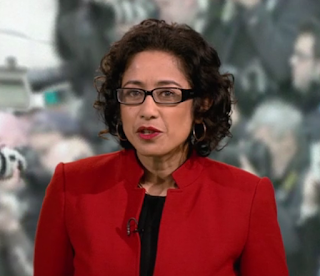 In praising Samira Ahmed's presentation of the BBC's Newswatch in the last post, I wrote "nor would she openly prejudge the main subject of her programme by openly giving her own view of the subject in advance - as Roger Bolton did here".

Well, it turns out that that's not quite true...

This week's Newswatch covered the "Agent Cob" story and, to its credit, put across a number of viewers' opinions that many hereabouts will appreciate being aired on the BBC.

Naturally, the BBC's response was along the lines of 'We got it about right', but at least these criticisms of the BBC have been given airtime on the BBC itself.

However, Samira engaged in a little steering of the audience herself by saying "Although the claims lacked evidence...some Newswatch viewers thought...".

Still, at least she didn't go anywhere near 'the full Roger Bolton' here:

Samira Ahmed: First, for the past week, many of our national newspapers have featured headlines such as "Corbyn the collaborator" and "Corbyn urged to reveal his Stasi file." Allegations that the Labour leader had questionable contacts with a Czech diplomat and agent in the 1980s emerged from files held by the Czech security service archive. The Labour leader called the story "nonsense" and accused the newspapers covering it of "lies and smears". But not all Newswatch viewers were so dismissive of the claims. This anonymous telephone caller thought they were at least worthy of an airing on the BBC:


You've covered the story regarding Donald Trump and the Russia investigation ad nauseam for months and months and months on end but there's nothing on BBC News, even though it's featured very prominently in the newspapers, and I'm a bit staggered and a bit flabbergasted by this.

Although there were some mentions of the story on BBC News, it didn't feature on the main television bulletins until a brief mention on Tuesday, and then gained more prominence throughout the week. By Wednesday on the Daily Politics, Andrew Neil tackled the subject to much acclaim.

Although the claims lacked evidence and were firmly denied, some Newswatch viewers thought it was too little, too late from BBC News. Lynette Smith asked on Monday, "Why have you not even passed comment? Admittedly they are only allegations, but you were quick enough to cover showbiz stars when years-old allegations of sexual abuse were laid at their door". And Barbara Stevens had the same question: "Why has there been no headline coverage based on the allegations? Surely this is a matter of public interest".  Well, we put that to BBC News and they told us:


BBC News has covered this story and Jeremy Corbyn's response in a range of our output. The BBC correspondent in Prague interviewed both the director of the Czech secret service and the former agent who made the original allegations.