"The BBC making its own news" 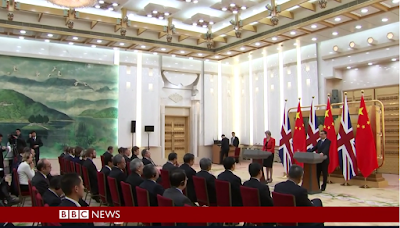 Yes, Newswatch can be frustrating when BBC editor after BBC editor comes on to say that the BBC is getting everything right, but at least it does provide a BBC-backed platform for viewers to say negative things about the BBC that, otherwise, they aren't usually allowed to say on BBC TV.

Take this, for example (from this week's edition):

Samira Ahmed: The purpose of the Prime Minister's trip to China this week was to promote trade. But at a news conference on Wednesday, the BBC's political editor Laura Kuenssberg had matters closer to home on her mind:

Laura Kuenssberg: To get things done, leaders have to be able to lead. The Prime Minister says she will fight on but concedes something has to shift.

Laura Kuenssberg (to Theresa May at the news conference in China): Prime Minister, on the journey here, you acknowledged that you and your Government have to do more to be convincing. What is it that you plan to do differently and will you stand up to your critics?

Several viewers felt that was not the time and place for such a question. Barbara Fierek put it like this:

Laura Kuenssberg asking Mrs. May a question in front of the major media reporters of the world, regarding her Cabinet's loyalty and disarray. I felt it was very undermining for her to use that opportunity to have a dig, very publicly, at Theresa May's party, and it was not appropriate to the occasion. Surely her job was to report on the visit.

Instead of asking a question about the UK/China relationship, Laura asked about what the PM planned to do differently to stand up to her critics. Then BBC News had the temerity to report that on her trip to China, Theresa May had come under fire on Brexit. The BBC making its own news.

On Friday, Laura Kuenssberg pursued the same theme in an interview with the PM:

Laura Kuenssberg (to Theresa May): People are asking you again and again to be clearer about your priorities. How long can you stay on, do you believe?
Theresa May: Well, let's be very clear about this. I've set out what my vision is. I've set out and I've said to people that at every stage where we can fill in the detail, we will do so and that's exactly...
Laura Kuenssberg: (interrupting) But how long can you stay on?

That line of questioning prompted more complaints, including this from Tony Webb:

I realise that the job of a reporter is to investigate and report on current affairs issues, but in this case the reporter concerned only interested in trying to continually harass Theresa May with questions regarding her continued tenure in 10 Downing Street.

I especially liked the one from Paul Smith there about "the BBC making its own news", but it has to be said that Laura K is quite the one for grandstanding at major news conferences.
Posted by Craig at 09:19