On the subject of Brandon Cox, this is quite a statement from Julia Hartley-Brewer:

And what do you make of this from Laura Perrins in response?

The BBC News website's headline for the story (see comments below) is: 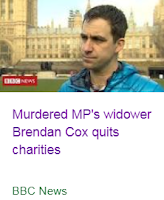