The 'big story' on my strange Twitter feed tonight is Jacob Rees-Mogg being caught up in a far-left-provoked piece of violence at Bristol University.

An overwhelmingly male, balaclava-and-baseball-cap-sporting band of coyly aggressive heroes tried to shout down the very conservative and polite Mr. Rees-Mogg for being "fascist scum" (evidently not knowing much about fascism).

Mr. Rees-Mogg behaved bravely and impeccably and walked towards them and tried to engage with them, but they weren't having it. They shouted, abused and refused to engage, and then fisticuffs ensued.

Mr. Rees-Mogg (with worrying shades of Jo Cox) may have been a victim of their violence but, from the footage, he didn't bat an eyelid and kept on trying to calm the situation.

He insists he wasn't assaulted by the left-wing bullies. Others (including the BBC's reporter at the event) insist he was.

'Tory' Kuenssberg (aka Laura) probably won't have appealed to such 'anti-fascist' thugs or to the worst elements of the Corbynista phenomenon tonight by tweeting:

And the BBC's News website's prominent Home page report about it (as it stands now) isn't, thank goodness, biased in favour of the Antifa-style bullies. A BBC reporter was present - the splendidly-named James Craig (an inversion of my Christian names) - and he wrote the following: 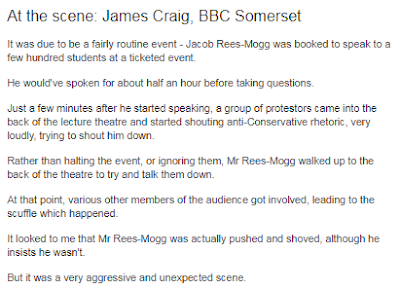