Jeremy Bowen himself, whilst being hurrahed to the rooftops by many pro-Palestinians on Twitter today, is standing firm against his pro-Israeli critics, insisting that he's being "fair and balanced".

It's certainly safe to say that he isn't being criticised from both sides.

Here's a review of his report that quotes, in passing, his entire report:


Any peace in Nabi Saleh on a cold winter day is an illusion.

It's a small Palestinian village on the West Bank - a sharp thorn in the side of its occupier, Israel.

The language here projects the almost Biblical image of a "small" person acting as "a sharp thorn" against a giant. Is it maybe David v Goliath, with the Palestinian village being the good guy David and Israel being the bad guy Goliath? The phrase "its occupier, Israel", certainly places Israel in the role of the bad guy.

The people here refuse to give in to Israel's overwhelming power.

And the image accompanying this is of an old, limping Palestinian man with a stick who then waves his stick angrily at the Israelis while a young man run alongside him with a Palestinian flag. 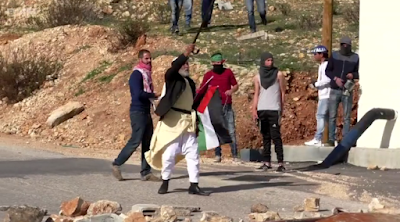 Pro-Israeli sites often talk about 'Pallywood' - the staging of propaganda events by Palestinian activists - and I have to say that this looked like classic 'Pallywood' to me. The old man's limp reminded me of Martin in Frasier. And then he turned into Andy from Little Britain.

It would be funny if only Jeremy Bowen didn't treat it as 'real news' rather than 'fake news'.

For some Israelis that makes them terrorists.

Well, we've seen the limping old man waving his fist and the Israelis firing tear gas (the next image), so what is a typical BBC viewer to make of that statement from the BBC's Middle East editor?...especially when Jeremy then moves straight on to say:

An Israeli soldier shot Mohammed Tamimi, 15 years old, in the face with a rubber-coated metal bullet. Surgeons took the bullet out of Mohammed's brain along with part of his skull.

The accompanying images were startling: an emotive close-up image of Mohammed's eyes looking distressed (before fading to grey): 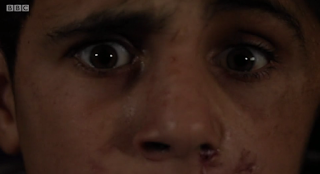 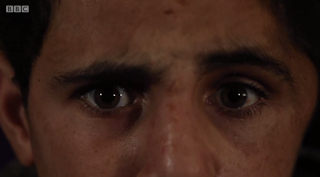 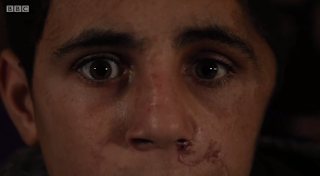 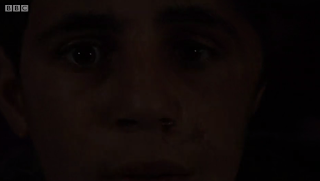 That felt too much like propaganda for my tastes.

Jeremy phrased the above very pointedly. My punctuation reflects that. Jeremy continued:

The Tamimi family lead the protests in the village. Many of them have been imprisoned by Israel for security offences.

It really is quite egregious here that Jeremy Bowen, reflecting on the Tamimi family, and presenting them as victims, failed to point out that two members of the family have been responsible for 16 Israeli deaths (15 at a pizzeria) in terrorist acts.

And the accompanying image? An old lady in sharp focus looking troubled against an out-of-focus image of a young man: 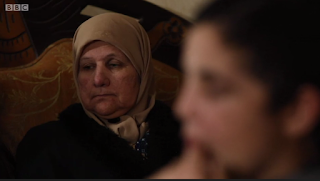 He was rushed to hospital after he was shot during a demonstration in Nabi Saleh on the 15th December. The village was protesting against President Trump's decision to recognise Jerusalem as Israel's capital.

And now to Ahed:

Ahed Tamimi, his cousin, a seasoned activist at 16 years old, told two Israeli soldiers to get off her family's property. She'd just heard, wrongly, that Mohammed had died. After one soldier swatted her away she slapped him. Once the video had gone viral Ahed was arrested with her mother Nariman, who did the filming. They're charged with security offences and face jail. Ahed's father Bassem Tamimi, an activist who's also served time in prison, has been taking her to demonstrations since she was small.

Interesting. Jeremy calls her "a seasoned activist" but immediately adds (in sympathetically terms) "at 16 year old". She tells two Israeli soldiers to "get off her family's property". She'd "just heard, wrongly", a distressing rumour.

Pro-Israel sites have generally praised the soldiers for behaving stoically, professionally and gentlemanly. Jeremy's report here misses the angle about the astonishing (but deeply admirable) response of the Israeli soldiers, merely representing the incident as an equivalent case of her slapping him (though she did much more than that) and him swatting her off (just about the only physical thing he did in response to her).

And, worse, the BBC's chosen visuals show the soldier "swatting" and Ahed responding angrily, as if the violence actually came first from the Israeli man towards the Palestinian woman.

Bassem Tamimi (Ahed's father) is introduced with a close-up of his sad eyes: 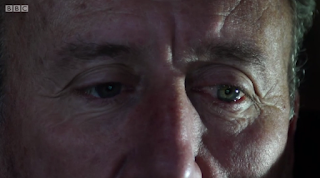 And then Jeremy is shown chatting with him over a video: 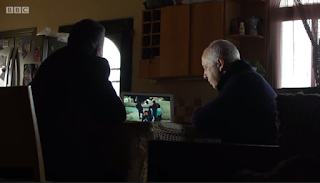 Jeremy Bowen: Lots of people would say that if you slap a soldier in any country you'll get into trouble so it's no surprise that the Israelis have put her on trial.
Bassem Tamimi: She can't accept an armed man to come to her field. And this is the occupier law. And we are resisting. That is our duty and our responsibility. We can't give our enemy a rose when he comes to kill us.

There's Jeremy Bowen of the BBC being all 'impartial'. He's putting a counterpoint in his question and his selected interviewee (very heartfelt-looking) has responded with a pro-Palestinian propaganda point. And Jeremy has countered with what? Well, not a counter point to the propagandist counter point but a pushing instead of further pro-Palestinian grievances:

So this is where it happened, in the driveway of the Tamimis' house. 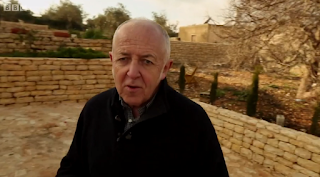 The incident says a lot about the conflict: the imbalance of force; the way it's invaded the lives of yet another generation; and the bleakness of a future with no prospect of peace.

Again, we're back to the highly contentious 'David v Goliath' way of looking at the Israeli-Palestinian conflict. Pro-Palestinian types present Israel as the Goliath of the region, with its superior military and nuclear weapons; Pro-Israel types present Israel as a tiny David nation surrounded by vastly populated (and growing) Goliath nations of extremely hostile Muslim Arabs. In his language here ("the imbalance of forces", "invaded"), Jeremy Bowen is clearly siding with the former.

And on he went:


Very close to Nabi Saleh is a Jewish settlement, illegal under international law. Last summer a Palestinian from another village killed three members of a family there. This area is always tense and the army's main job is to guard the settlers.

The BBC is famous/infamous for its language about Jewish settlements. Pro-Israel critics of the BBC fume about the BBC's prescribed-from-on-high phrase about "The settlements are considered illegal under international law, though Israel disputes this" yet BBC report after BBC report follows this phraseology word for word. Jeremy Bowen here dispenses with the BBC's tongue-twisting editorial guidelines altogether and simply puts it in the anti-Israel way ("illegal under international law"). Jeremy is obviously too 'big' a BBC man to bother following BBC guidelines here - not that he's very likely to be censured for going fully anti-Israeli in his language here.

As for "Last summer a Palestinian from another village killed three members of a family there", I was at a loss to know what this incident involved. If you want to read about the people behind that killing  (unmentioned here) please read here.

On with the Palestinian grievance stuff:

Like all West Bank Palestinians, Ahed Tamimi is being tried in a military court, which usually convicts. More than 300 Palestinians under 18 are serving time as security prisoners.

(Has the BBC fact-checked that?)

On for a spot of BBC 'balance':


Some Israelis are horrified by the imprisonment of children...

"The imprisonment of children"? Oh my! How 'balanced' is that?!


...but most feel that she should be punished - and perhaps her family too. 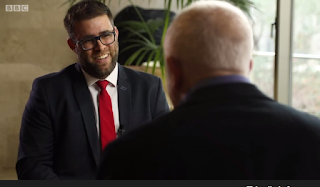 Yes, there's the "true" 'balance' of the piece: a short interview with a knuckle-headed Israeli MP that makes it look as if "most" Israeli MPs are representing "most" Israelis in wanting to kick a 16 year old Palestinian girl in the face...

...despite the fact that this self-same Israeli MP was the very Israeli MP that the Israeli parliament just yesterday suspended for six months for being offensive towards women and Arabs - i.e. not representative.

Jeremy Bowen was now building towards his grand climax:

No peace protest exist any more and reviving one looks less and less likely.

At which point it was back to Mohammed Tamimi's distressed eyes in the accompanying visuals: 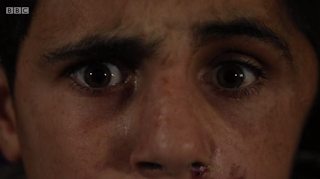 And on Jeremy went, piling on the words towards his peroration:


The future of the next generation is going to be difficult. Incidents like this show the level of tension and anger that's just below the surface. Palestinian lives are dominated by the occupation. But keeping a people under military rule for 50 years has also had a profound effect on Israel. Without change for the better the risk is that the West Bank will slide into more serious violence. Jeremy Bowen, BBC News, Nabi Saleh.

Pro-Israel sites will have an absolute field day with "Palestinian lives are dominated by the occupation" and "keeping a people under military rule for 50 years". They will point to the Oslo Accords, the Palestinian Authority and various areas. And, disputed as their claims may be, they'd be right - regardless!' -  to claim that Jeremy Bowen's talk of "50 years" of "military rule" is heavily loaded language.

So, is this the most partisan piece of BBC reporting who've heard in a long time? Or is it simply a Jeremy Bowen report?
Posted by Craig at 22:18