Below is a full transcript of Samira Ahmed's interview with Nick Bryant on this week's Newswatch: 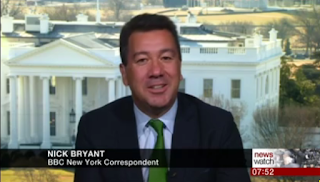 Samira Ahmed: On Tuesday night, Donald Trump addressed a joint session of the United States Congress in his first State of the Union address, just over 12 months since he took office. To say it's been a newsworthy and controversial first year as President is something of an understatement.

Jon Sopel: The weightiest issues on the planet were discussed at Donald Trump's inaugural address, but what the president is in a white rage about are suggestions that the crowds for him weren't as big as they were for Barack Obama eight years ago, even though the evidence is incontrovertible.
Nick Bryant: Many people around the world will be saddened and sickened to see the president of the United States appearing to validate tweets from a far-right group. Ten months into this unorthodox and provocative presidency, Donald Trump still has the capacity to shock.
Donald Trump: And it wasn't until I became a politician that I realised how nasty, how mean, how vicious and how fake the press can be as the cameras start going off in the background.

That antagonistic relationship with the press has been caused, in the opinion of some Newswatch viewers, by relentlessly negative reporting on the part of much of the media, including the BBC. Here's Paul McTigue:

Paul McTigue: I do not feel that the BBC gives balanced coverage of the US President. Admittedly, Mr. Trump is a divisive political figure, but every day seems to bring fresh insults and smears, in an attempt to right the 'wrong' of his election.