Moths to a flame

It seems like only a decade ago that we were reading Craig’s piece about Claire Kober’s upcoming spot on the Marr Show. Oh, hang on - it was yesterday.
Anyway, I think there was something about antisemitism in there?
Oh, here it is, look. 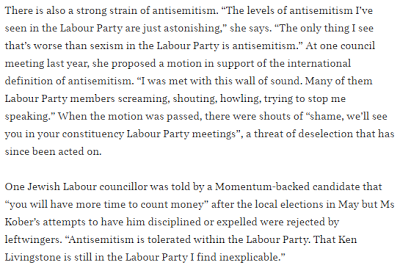 Well, Andrew Marr wasn’t interested in any of that. When Kober touched on it briefly, Andrew ushered her away quick. Remember? Something about a demonstration against defining antisemitism? “There’s nothing wrong with demonstrations” said Andrew, or words to that effect, before swiftly moving the conversation back to the matter in hand.

So, here’s the thing. Everyone (well, not everyone) said it was a good interview, including ((Hodges)) and I do realise that Kober wouldn’t have been on the show at all if it wasn’t for all that London-centric stuff about Housing in Haringey.

Far be it for me to hijack that earth-shatteringly controversial topic with my feeble little bleatings and whinings about antisemitism, but frankly, after that piece in the Times it was a little conspicuous by its absence.

The only mention of antisemitism I spotted in BBCland all morning was Sarah Smith talking to Jon Ashworth, Labour’s Shadow Health Secretary, who uttered those galvanising words “if there was antisemitic chanting it needs to be reported and if they are antisemitic they need to be thrown out of the Labour Party.” Yep, ne e e e d away.

Stella Creasy brought it up on the other side, with Robert Peston. There’s nothing like mentioning antisemitism for attracting the antisemites. Like moths to a flame.

.@stellacreasy reacts to the resignation of @ClaireKober and insists it is time for @UKLabour to act more strongly on anti-semitism and misogyny. #Peston pic.twitter.com/d1LrF9JH4E
— Peston on Sunday (@pestononsunday) February 4, 2018