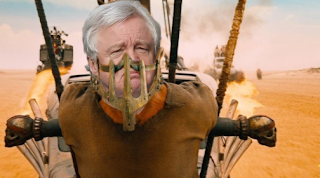 David Davis is a seasoned politician and I'm sure he's much, much wiser than me when it comes to the art of politics so I probably shouldn't lecture him but I can't help feeling that he's made a big mistake by even raising the possibility that post-Brexit Britain could be a “Mad Max-style world borrowed from dystopian fiction”. The enemies of Brexit were surely bound to pounce on such language and make hay with it.

And pounce they most certainly have, and the fun has already begun.

Jay Rayner: I don't know about you, but that's me reassured. (Still, I'm stockpiling petrol, chainsaws, and a fine collection of leather chaps; better safe than sorry, eh).

Alex von Tunzelmann: I for one am certainly not now panicking and working out how to distil drinking water from my own bodily fluids.

The Guardian immediately made David Davis: Brexit will not plunge Britain into 'Mad Max dystopia' their main headline last night, and they were closely followed by the BBC doing the same thing, with the headline Post-Brexit UK won't be 'Mad Max-style world' and a photo of a worried-looking David Davis alongside it:

Britain will not be "plunged into a Mad Max-style world borrowed from dystopian fiction" after it leaves the EU. That's what the Brexit Secretary David Davis is expected to say in a speech he'll make in Austria later today.

And one of the presenters said:

And it does seem an extraordinary use of language, to be talking about Mad Max, even if he is saying that is not what will happen.

And Emily Maitlis, on last night's Newsnight, outlined the story and then laughed, asking "So that's good news?"