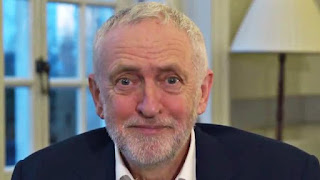 Did you watch Camilla Tominey on Question Time, (that is if you could bear to listen to John Prescott’s semi-decipherable streams of verbiage, or watch the Asian lady brandishing those scissor-hands menacingly as she performed exaggerated expressions of disapproval) No, Question Time was barely watchable, and the clip from Tominey’s Corbyn speech was a brief highlight amongst a large field of lowlights. It makes no difference whatsoever. Friend of Hamas? Hezbollah? IRA? Press TV? Commie spy? Everything thrown at Corbyn is simply dismissed as a smear; not that his loyal followers would care either way.

Did you listen to The News Quiz? I accidentally caught part of it. The panellists were amusing themselves with affectionate jokes about Corbyn’s ineffectual spying, but the fact that they ridiculed their hero was probably enough to counter accusations that the BBC’s comedians never satirise Jeremy Corbyn. We learned that Jeremy Hardy has been a friend for years; name-dropping of a most peculiar kind.

According to the Guardian Ken is coming back! Did you know that Ken Livingstone is all set to be reinstated as a member of the Labour Party? He never did anything wrong.

The tide of antisemitism engulfs the Labour Party and it looks as if a great many people are resigned to a Labour Government in the not too distant future.

“But the toxicity of the Hampstead and Kilburn Labour Party has meant that I have had no choice but to speak out on racism, time and time again. At seven of the last nine meetings, the Kilburn Brent Branch of the party has tabled toe-curling motions singling-out Jews and Israel. Seven out of nine. If that is not institutional racism, I don’t know what is.”

I watched Nigel Slater the other day. He went to the Middle East (Turkey, Lebanon and Iran) because he loves Lebanese cuisine and wants to experience the renowned hospitality of the people. That’s something that people like Nigel Slater always marvel at. Because of their generosity and their aromatic cuisine, he and people like him overlook the antisemitism and more barbaric elements of Islamic culture.

This is mad, I know, but I always feel instinctively sorry for Nigel Slater. He seems lonely. But at least he has a lovely kitchen, and like Nigella, always has special artisan groceries wrapped up in crinkly greaseproof paper, not like the vacuum-packed and impenetrable stuff from Lidl’s and Morrison’s. Nigel and Nigella - the his and hers of posh shopping.

One aspect of Nigel’s jaunt through (some of) the Middle East troubles me in the same way ex-hostage (in Lebanon) John McCarthy used to when he hosted a travel programme on radio 4. He was always extolling the virtues of Damascus as a holiday destination. Of course, that was way back in the days when Damascus was merely a police state, rather than an out and out war-zone.  He never mentioned that Bashir al-Assad’s spies were everywhere, eavesdropping on every conversation.

But still, nice middle-class people have a thing about Muslim countries and people so hospitable that, no matter how poor, they’ll give a stranger their last sheep’s eye. Well, last week Nigel left Lebanon, where he had been most warmly received by all, Hezbollah was nowhere to be seen and politics was never mentioned but for a couple of oblique references to “the War”. How would he be expected to care that Hezbollah has about 500,000 rockets pointing at Israel?

Off he trotted, to Iran. Nigel was overcome with joy at the hospitality of the Iranians. And only one teeny little mention of the current regime; something about ‘fun’. ‘Long lost,’ it was. I heard there's no such thing as homosexuality in Iran. Luckily for Nigel.
Posted by sue at 16:59