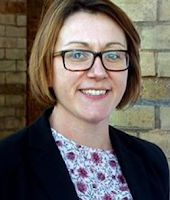 Tomorrow's The Andrew Marr Show will feature an interview with Claire Kober, the most senior Labour woman in local government, who resigned this week as leader of Haringey Council accusing the far-Left of "sexism", "bullying" and "politically intimidating behaviour".

The BBC News website has three reports on the story, none of which report her comments about antisemitism in the Labour Party. The Times, by way of contrast, has this today: 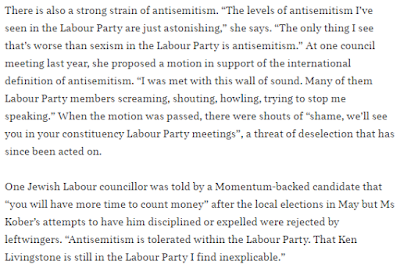 Hopefully, Andrew Marr will be asking her more about that tomorrow.

As you'd expect these days, the programme's editor Rob Burley is already on the receiving end of lots of very displeased far-left tweets. I suspect his Twitter feed tomorrow won't be pretty.

Update: Rob is already in action, sticking up for himself (and the BBC) against the Corbynista horde's onslaught. Here's a polite example:

And (further update) on it goes...

Socialist Scott is being somewhat elaborate with the truth there on the "all week" front. As far as BBC One's main news bulletins are concerned I see Ms. Kober got a mention at 10:27 on Friday's News at Ten - i.e. as pretty much the last item. And that was it. (Andrew Neil's This Week covered it though).

Again, the 'complaints from both sides' argument falls flat. The Socialist Voice here was talking utter rubbish about the BBC.
Posted by Craig at 14:45