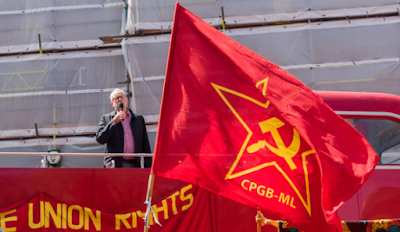 Talking of Marks at the BBC (as we were in the post now bumped up above this one!)...

One I trust vastly more than slippery Mark Easton - namely Newsnight's Mark Urban -  has been digging into the 'Corbyn=Czechoslovak spy' story.

And, yes, as I result of what I've read from Mark (on Twitter) this afternoon, I'm going to go out on a blogger's limb and firmly predict (with no other evidence yet to to support it other than knowing what the BBC is like) that...

...yes, Newsnight is finally going to report the story tonight - and, even more,  is actually 'go big' with it.

And why do I think that? Because Mark has sounded the 'All Clear' for the far-left Labour leader.

Yes, from his digging, all's apparently coming up smelling of Bohemian, Moravian and Slovakian roses for Agent Cob...
After its most respected reporter has now found the Labour leader innocent of being a Soviet bloc agent, shall we take bets on how long Newsnight will spend on the story tonight, having spent no time whatsoever on it up till now?

Guido Fawkes, however, isn't sounding the 'all clear' and is continuing to do its own digging.

If Newsnight takes the impartial high ground and doesn't much a lot of Mark Urban's researches today, after ignoring the story for nigh on two weeks, I'll give them credit tomorrow.

I really doubt they'll be able to contain themselves though.

Update: And the answer is: They didn't cover it. I'm about as 'mystic' as 'Mystic Meg' herself!
Posted by Craig at 19:48