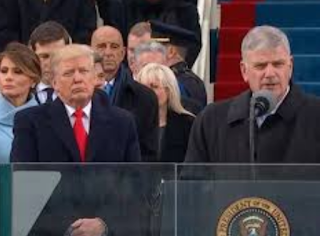 The interview that followed Edward Stourton's interview with Mona Siddiqui could hardly have been more different. It was a Martin Bashir interview with a Trump-supporting evangelist, Franklin Graham (son of Billy Graham).

Edward Stourton's introduction had a mocking tone and then came the c-word - "controversy".

The "controversy" arises because of his beliefs and because various campaigners in the UK want to stop his visit to Blackpool later this year.

Martin Bashir interrogated Mr. Graham in the manner of a prosecution barrister, constantly invoking the "offence" Mr. Graham's words have caused (to Muslims and LGBT people).

Franklin Graham still believes things that all Christians used to believe. He believes in God, and that God is involved with the world, that the way to eternal life is through Jesus Christ, that Islam is a false religion, and that homosexual sex acts are sinful.

He's definitely not a 'BBC Christian'.

Martin Bashir is, and gave Franklin Graham a very chilly grilling.
Posted by Craig at 12:47