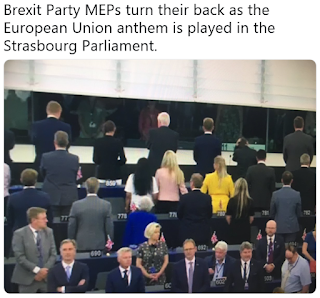 He may no longer bat for the BBC, but it's always good to catch up with old friends. Here's that oh-so-nice Gavin Esler again, literally comparing The Brexit Party to the Nazis:

I’n [sic] just surprised that the Brexit party so shamelessly copied the Nazi party in turning its back in an elected assembly. At least we now know what we are up against.

Not that Gavin himself is up against them in the EU parliament, what with having failed to be elected in May.
Posted by Craig at 16:49