Sarah AB is a regular ‘above the line’ contributor to one of my favourite pro-Israel blogs, Harry’s Place. I find the b.t.l. comments varied, mainly erudite, though often surprisingly combative and irascible.  Sarah AB, renowned for her champion-level fence-sitting, has gawn and done it again. She’s positively teetering on top of the most uncomfortable rung of the fence.

As far as the Israeli Palestinian conflict is concerned, all pre-1967 history is a big empty BBC void. The BBC is of the opinion that ‘it all started’ when Israel spontaneously decided to occupy Gaza and the West Bank.  The crucial evidence - that the six-day war was an intended war of annihilation - is routinely hidden or absent from the narrative. Israel’s neighbours had hoped to destroy it, but they miscalculated. 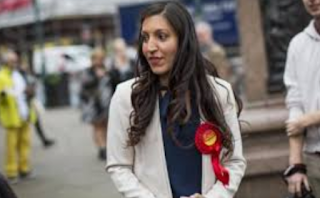 Apparently unaware of the BBC’s promotion and amplification of Dr Allin-Khan’s agenda-laden fact-finding mission, and having avoided listening to the run-up to the current situation,  in a similarly context-lite manner Sarah AB has dived straight in at the middle of the Dr Rosena Allin-Khan saga.

She must also have missed the Today Programme where Mishal Husain’s overbearing chairperson-ship pushed any potential reconciliation further away than ever.

In Sarah AB’s post, she seems to imply that Dr Allin-Khan had made a conciliatory gesture - almost a sacrifice - in accepting an invitation to the Israeli Embassy to continue the discussion face to face. Perhaps it was courageous to venture into enemy territory when you see the enemy as mad, bad and dangerous, but surely the magnanimity was on the part of the deputy Ambassador who was so unkindly disrespected by Husain.

Issuing an invitation to an openly hostile adversary who, aided and abetted by the BBC, had been doing the rounds to promote a disingenuous, Israel-bashing agenda, shows considerable generosity of spirit. After being subjected to the Beeb’s infamous two-against-one scenario and forced to sit through a distorted account of one's own country's gratuitous malevolence, I doubt if many of us would be as generous with our hospitality. Especially when the chances of changing an implacable mindset were next to nil. But hey ho.

In the end, (which is where Sarah AB came in) it was those disgustingly shocking antisemitic tweets that opened Allin-Khan’s eyes. She is simply experiencing the extreme end of the “No to Normalisation” phenomenon. There can never be peace while so many people are busily shoring up Palestinian intransigence, as the BBC is.
It takes bare-faced hate to expose the antisemitism behind the ‘no normalisation’ campaign and to show the futility of encouraging the armies of useful idiots on the left who think they are helping the Palestinians. They mean well, as I’m sure does Sarah AB.