Talking about nonsense, try this gem out:


The BBC is biased against the left.

Don’t take my word for it, just take a moment to watch this superb video from @alexnunns and @EL4JC - and then give it a retweet. pic.twitter.com/40ckrkkdk9
— Rachael Swindon #EL4C (@Rachael_Swindon) July 6, 2019

Now, this wonderful video totals up the various commenters on the old Sunday Politics show and finds that the programme was dominated by the Right, with the Centre coming in second and the Left lagging way behind. It also find that there has never been two left guests on the panel. 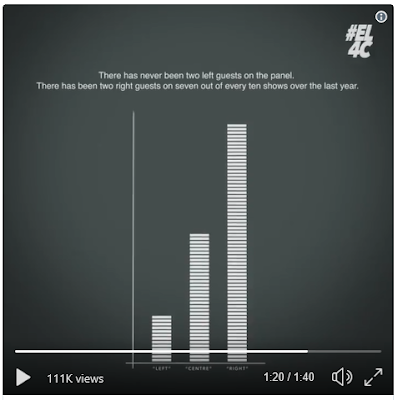 Damning, eh? Except that the chaps behind it chose to put Polly Toynbee, Helen Lewis, George Eaton, Steve Richards, Anushka Asthana, Rafael Behr, Gaby Hinsliff and Ella Whelan in the Centre column rather than the Left column and shoved everyone else not of the far-Left into the Right Column.

Now, if you move Polly & Co, back into the Left column, a very different story emerges. The Centre plummets and the Left soars, and it also turns out that there have been many occasions when there were two left-of-centre commentators on the same programme.

Actually, if you watch the dizzying sequence grow on that video, a proper trend does emerge. As the date gets nearer to today the frequency of the far-Left's appearances grows. (The show sadly ended before Ash Sarkar arrived on the scene!)
Posted by Craig at 12:20