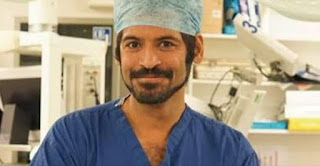 You’ll be dying to hear what I thought of the programme about male circumcision, “A Cut Too Far”.

I have to say I was pleasantly surprised. The presenter Adnan Sarwar is from a Muslim background and his family still live in Burnley where he grew up.

Nowadays that he’s a cosmopolitan kind of guy with a busy life and an impressively open-minded approach to male circumcision. I breathed a small sigh of relief when I realised that this wasn’t going to be a vehicle for more Jew-bashing.

As a completely secular person I don’t relate to traditional religious practices at all, but I do understand and half-empathise with the tribal ‘pull’ that keeps them going.

I liked Adnan’s respectful manner when speaking about this with his father, a fairly immovable traditionalist. At one stage it seemed that Adnan was veering towards the pro-circumcision side of the argument, but at a later stage, he appeared to have swung into reverse.  He hasn't got any children yet, but it does look likely that any boys he might have will remain intact.

Jewish News reported that the documentary “gets a mixed reaction.” Well, at least they weren’t wholly condemnatory of it.
Out of curiosity, I had a look at Adnan’s Twitter timeline, and I think I got a better picture of where he was ‘coming from’ from that.

I was one of the three viewers that stayed awake long enough to see whether the very last edition ever of This Week was worth watching. After Andrew Neil's scathing remark about the previous programme and the BBC’s non-user-friendly scheduling of his own show, I have to agree with some of the comments on Guido - that a great deal of it was cringeworthy.