A 'special' report from Nick Bryant 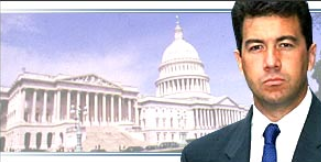 Last night's BBC One News at Ten carried a reporter by the BBC's North America Correspondent (as he was introduced) Nick Bryant. I'll post a transcript below, with my added comments in red italics:

Newsreel footage: During his visit, the Prime Minister and Mr Roosevelt consulted with members of the Pacific War Council.

Nick Bryant: The special relationship has often turned on personal relationships between the leaders in Washington and Westminster. Churchill and Roosevelt formed a close wartime alliance. Reagan and Thatcher were like ideological newlyweds. Bush and Blair were from different sides of the political street but nonetheless became partners in Iraq. The chemistry already seems good between this billionaire populist and old Etonian populist [loaded descriptions intended to undermine their 'populist' credentials by emphasising their 'privelege'], here meeting at the United Nations in New York, the city where both men were born. In Donald Trump, Boris Johnson has a transatlantic fan. Tonight came warm, soothing words [a hint of a mocking tone there] from the White House:

Nick Bryant: The special relationship has always been cyclical, but the recent trendline has been downward. Barack Obama and Gordon Brown were not especially close and although he became barbecue buddies with David Cameron he regarded Angela Merkel as the key, European leader. Donald Trump's relationship with Theresa May started with a gentle tap on the hand but ended with repeated kicks in the teeth. Ever since Churchill first coined the phrase, the special relationship has meant far more to the British than the Americans, as that's especially true now. As the UK tries to exit the European Union it's becoming more diplomatically isolated [in Nick's opinion] and it desperately [another loaded word] needs a trade deal with the United States. That partly explains the early offer of a state visit to London. But this America First president prides himself on his negotiating skills and knows he has by far the upper hand.

Nicholas Burns, former US Under-Secretary of State: [Unannounced to BBC viewers, someone who supported Hillary Clinton in 2016 and is now supporting Joe Biden] A mature, wise and responsible American president would look at Britain engulfed in this fundamental crisis and give Britain a helping hand. I worry that this unscrupulous, mercurial, unpredictable president in the White House could even try to take advantage of Britain in a moment of weakness . That wouldn't honour the special relationship.

Nick Bryant: But the man Donald Trump once suggested should be UK's ambassador to Washington, Nigel Farage, claims [why not 'said'?] he's a more faithful friend:

Nigel Farage: Well, we need to press the reset button. Donald Trump is a businessman. He will go for a good deal. Of course he will.. As we will go for a good deal. I think it's remarkable, given that over the last three years we've disappointed Trump again and again and again, he is instinctively pro-British. He wants us to have a much better relationship than we've currently got.

Nick Bryant: But Boris Johnson also needs to win the Democratic House Speaker Nancy Pelosi, who has warned [why not 'threatened'?] that Congress won't ratify a new trade deal if Brexit jeopardises the Good Friday Agreement. She visited the Irish border earlier this year to hammer home that point. Donald Trump seems untroubled that Boris Johnson once said he betrayed "stupefying ignorance" about crime in London, but can the new Prime Minister repair a special relationship that risks becoming servile [an opinion disguised as a question]? Nick Bryant, BBC News, Washington.
Posted by Craig at 11:13