Is the BBC impartial? 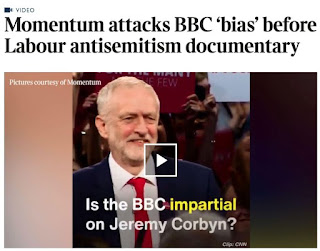 I’ll reserve judgment on tonight’s Panorama till it’s all over, but there is plenty of pre-emptive activity around. (The Times) (£)

In case it seems hypocritical to put one’s faith in any episode of Panorama in the light of the infamously aborted Tommy Takedown, it does seem that there is justification for doing so sometimes.

The upcoming programme about antisemitism in the Labour Party is the creation of John Ware, who has a uniquely non-BBC outlook, while the aborted Tommy-bashing episode was concocted by John Sweeney, whose agenda is typically Beeb.

I don’t claim that either of these men is bias-free or that their programmes could be scrupulously impartial and/or agenda-free, but at least John Ware is prepared to go against the grain.

Unlike Dominic Casciani, whose Tweets are ‘deffo’ BBC through and through. (H/T Monkey Brains in a btl comment)


What started out as a stupid and weirdly snobbish remark from Casciani turned into a massive sneer-athon by a trail of Tommy-bashing sycophants - half of them accusing TR (aka SY-L) of squandering £500 (of donors’ hard-earned dosh) on a pair of Gucci loafers, while the other half sneering that they were obviously only a ‘knocked-off” version.