A change of heart from the BBC?

There have been some further developments on the BBC's guidance prohibiting representations of Mohammad, the Muslim prophet.

However, as Roland Deschain at Biased BBC spotted, earlier in the day the BBC was simply denying there was such a guideline, with Eddie Mair reading out (here at 51:10) a denial that it even existed (following Dan Hodges' mentioning of it earlier in the programme).

Guido Fawkes appears to have extracted a response from the BBC Press Office:


As RD at Biased BBC observes, "Blimey, if it’s been a long-standing position how old must that guidance be then? What was that I said about tying themselves in knots?"

As Question Time was been recorded and then broadcast, both the BBC's News at Ten and Newsnight broadcast images of Mohammad from Charlie Hedbo. The previous day - the day of the attacks - such images had been conspicuous by their absence.

Sometime in the past 24 hours the editorial guideline was removed from the BBC website. If you click on the link now, you get this message: 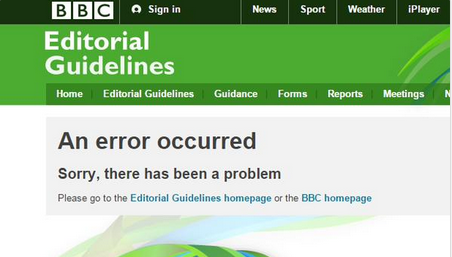 There seems to have been a degree of panic at the BBC over this.
Posted by Craig at 17:12