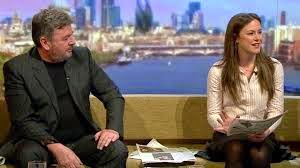 The paper review featured David Aaronovitch of The Times and someone he introduced as "Isabel Hardman of almost everywhere", which is both funny and true - though she's still got a long way to go to beat Nabila Ramdani (who, according to Twitter - and, therefore, clearly true - will be reading Radio 4's Shipping Forecast later today).

There was a telling sign of BBC thinking though during a powerful section of the paper review dealing with anti-Semitism. David Aaronovitch was beginning to make a point that, despite being true, is rarely said on the BBC.

David Aaronovitch: Anti-Semitism is a light sleeper. I never...I think, for a while in my life, I thought we'd done it. It had gone. We'd defeated it, and so on. Whether to a certain extent it's been, you know, what's happened in Palestine linked to the fact that we've had a significant increase in the Muslim population, large numbers of who don't feel that warmly towards Jews for various reasons....

David Aaronovitch: Well, I am being careful...

David Aaronovitch: ...because I don't want to say most Muslims, all Muslims, feel like that, but more do than was the case in the British population before that.

The two big political interviews of the day were with Nick Clegg and Natalie Bennett of the Greens.

The interview with the Lib Dem leader was lively, that with the Green leader more sedate. The closing sofa discussion saw David A, Isabel H and Natalie B ganging up on Nick C to get him to say that the Greens should be involved in the election leader debates on TV. Nick Clegg wriggled before saying to Ms Bennett that she's looking out for Green Party interests and he's only doing the same - a point no one picked up on as they ran out of time. They'd missed a rare (forced) admission from a leading politician that party advantage trumps everything in this kind of area.

Asked about where the money would come from to finance her party's lavish spending commitments, Natalie Bennett, of course, went straight for scrapping the Trident nuclear weapons replacement, thus saving £100 billion over its lifetime.

Andrew Marr later asked her about an extraordinary commitment she's made:

One other really big issue of course is your economic policy. You want to give a kind of citizen’s income (I think you call it) of £80 a week to everybody in the country regardless of whether they’re in prison, whether they’re asylum seekers or anything. Now this has been costed at £240 billion a year, which seems an extraordinary amount of money. How are you possibly going to raise the money for that?

It's one of the advantages of being an armchair interviewer that I can see that he should then have gone on to join the two points together and point out that such a commitment over a five-year parliament would could £1,200 billion in total - or, in other words, twelve times more than the cost of replacing Trident (her rabbit in the hat). But he didn't ask that, and I wasn't a studio guest who could sneak that in during 'sofa time' at the end.