Point scoring from Yolande Knell at the funerals in Jerusalem 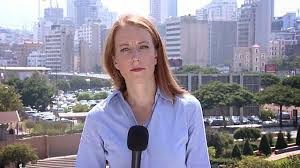 Yolande Knell was reporting live from the funerals in Jerusalem of the four French Jewish men murdered in Paris on today's News at One on BBC One. Characteristically, she couldn't resist ending her piece by attempting to score a point against Benjamin Netanyahu:

And it is normal Israeli government policy to encourage Jews from all around the world to make this their home. But the invitation that was made by the Israeli prime minister after that huge unity rally that took place in Paris on Sunday has been criticised, with many European leaders saying that running away is simply not the answer.

That's a distasteful way of putting it, isn't it? Especially in the circumstances.

So which European leaders have criticised Mr Netanyahu for making that invitation? Did any of them use the phrase "running away", or is that Yolande Knell's own choice of words? (Or words drawn from a Haaretz editorial?)
Posted by Craig at 15:08