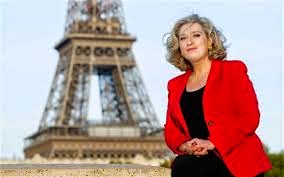 Following Emma Jane Kirby's report on Broadcasting House and Paddy O'Connell's immediate repetition of "if ever France needed to unify it's now", the programme interviewed two people on the subject of French secularism.

First came Professor Tariq Madood, a British-Pakistani sociologist from Bristol University who, for some reason (despite not being French), was brought on to attack French secularism.

He approved of Emma Jane Kirby's report, calling it "stirring", and backed her calls for unity before immediately moving the focus onto those people who want to take advantage of that polarisation [and he clearly didn't mean the Islamists]. He argued that French secularism denies religious freedoms, though it very quickly became crystal clear that it was only the religious freedoms of Muslims that bothered him - their freedom to wear Muslim headscarves, for example. He went on to describe France as a 'Catholic-secular' country, denouncing Catholic state holidays, funding for Catholic schools, Notre Dame being the focus for the commemorations of the victims of this week's attacks. He wants an "open plural secularism", with lots of imams. [I don't think I'm caricaturing him much there].

Paddy twice asserted during this interview that Prof Madood was echoing the calls for unity. He seemed a lot keener on that than Prof Madood, it has to be said.

Then came an interview with a somewhat startled Anne-Elisabeth Moutet of the Daily Telegraph. She was startled, firstly, as being introduced as someone whose latest article was a rallying cry to defend French secularism. She said that wasn't what her article was saying. (And reading it, it isn't). And, secondly, she was startled at being presented with the idea that French secularism was in question. She said, until she'd heard Prof Madood just then, she'd never thought that French secularism was controversial; indeed, that pretty much everyone in French agreed with it. She also sounded a bit miffed that Prof Madood, not being French, had been brought in by the BBC to expound on the subject and demand change from the French.

Well, that's the BBC for you, Anne-Elisabeth.

Anne-Elisabeth talked of unity - the unity of the French over their core republican values. Paddy also talked (again and again and again) of unity, though he seems to have meant it in the sense of 'bringing in France's Muslims'. Same word, different priorities.

A snippet of the upcoming Mark Mardell interview with Willem of Charlie Hebdo followed. Can you guess which bit they chose? The bit where Willem attacked Marine le Pen and the extreme-right. Obviously.

I said in an earlier post that the BBC, in choosing French newspaper journalists, tends overwhelmingly to go to Le Monde (the French equivalent of the Guardian). Broadcasting House did just that today - a man who described the Charlie Hebdo cartoonists as "borderline Islamophobic". (He also attacked Liam Fox as "silly" for saying we should focus more on security in the wake of the attacks).

Still - and still avowedly pursuing unity, and "Live together" - Paddy gave us one last voice at the end of the programme, that of a Tunisian commerial TV station owner: Tarak Ben Ammar of Nessma TV. Tarak is also a film maker whose credits include The English Patient and The Life of Brian. He was a friend of Georges Wolinski, the 80-year old Jewish Tunisian cartoonist.

I was genuinely shocked during this interview to hear that Elsa Cayat, the only woman murdered at Charlie Hebdo, was Jewish. Did you know that? I'd spotted that there was a woman among the dead, having previously heard that the killers had spared the women there (telling one to read the Koran and convert to Islam). Another strong sign of Muslim anti-Semitism that seems to have been strikingly under-reported.

Mr Ben Ammar says that "moderate Muslims" like him haven't taken the time to educate their youth.

He did, however, join Prof Madood in blaming French secularism, to some extent, for allowing the imams to set the agenda. He blamed the imams more, of course, especially the foreign ones. He said there are 3,000 imams in France, of whom only 700 are French. The rest are foreign-born with their own agendas. He wants French imams trained in France - something that might run counter to French secularism. He also worried about racism and 'Islamophobia' and thinks things are going to get worse after this march. He's supporting the 'moderate imams' and his new PM.
Posted by Craig at 19:07