When I logged on the other morning I spotted ‘The lost sons’ on the top of ‘BBC News’ in our blogroll in the sidebar. It wasn’t there for very long, but when I saw it my heart sank. (It keeps doing that) 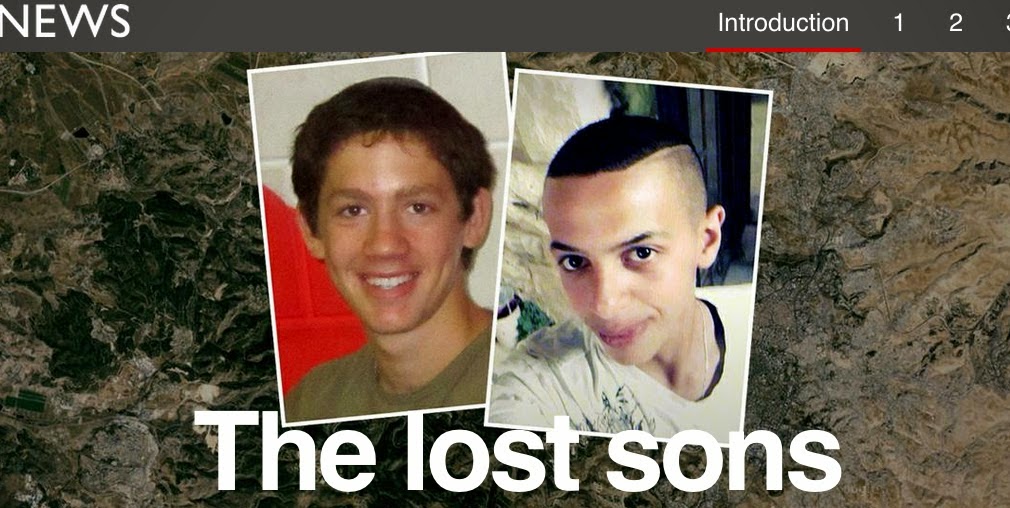 I knew I ought to click on it, and I did, but before doing so I wondered why anyone (at the BBC) would think that was a suitable topic for a morality tale. I thought the aim of the writer would be to compare two seemingly similar tragic events and conclude with a moral message. Sort of like the temporary truce on Christmas day; a message of hope with its implicit false equivalence.

Well, over at the site I found a cornucopia of images, some videos and some elaborate graphic effects.
One fairly obvious reaction from supporters of Israel would immediately be that there were three Israeli boys murdered, whereas just one Palestinian. Perhaps the inclusion of two other Palestinian teenagers who were shot by Israel’s security forces and the IDF was Mike Thomson’s attempt to even the score. What do you think?

For an outsider it does seem rather extraordinary that an Israeli teenager should be allowed by his parents to hitchhike around the occupied West Bank, given the animosity felt by Palestinans (sic) there to anyone they perceive as a settler.

says Thomson. However the answer to this question is provided in the article.  It is in a short video explaining why hitchhiking is commonplace in Israel. It didn’t even try to insinuate that the three Israeli boys, settlers, no less, were ‘asking for it’ by getting into a stranger’s car, as Mike Thomson assumes he and fellow outsiders would think.
In fact it made a couple of points in the other direction. 1)That terrorist attacks in Israel make public transport as dangerous, and 2) In Israeli society one can normally rely on the genuinely public spirited motive of the motorist.

Pleasingly, Mike Thomson does something unusual. He ‘humanises’ the Israel family, treating them in the same manner as the BBC consistently treats ‘Palestinians’. Here, Israelis have names and they text each other about their arrangements, just like ‘us’.

But other things were more troubling. Take this paragraph:

“The resulting anger and bitterness among Israelis led to the loss of another young life. This time an Israeli Arab boy, the same age as Naftali, 16-year-old Mohammed Abu Khdeir.”

There may well have been a great deal of anger and bitterness among Israelis, as there would be anywhere else under similar circumstances. But to say this led to the loss of another life is almost to suggest that Israelis in general approved of this act of revenge, which is the opposite of the case.

However the worst aspect of this in depth report is its failure to directly compare the attitudes of the Israeli and the Palestinian families and the attitudes of their respective public.
There are ample references to Palestinians’ bizarre reaction to the murder of Mohammed Khdeir. Their refusal to believe that the police made an effort to find him because he was an Arab and not a Jewish boy, and this whole section:

But Mohammed’s parents insist, despite all the evidence, that Naftali and his two Israeli friends weren’t actually murdered at all - they died in an accident and the Israeli government used the deaths to fuel anger against Palestinians.
His mother says the Israeli government “wanted to bomb Gaza and planned to use this as a justification”.I ask how widespread is this belief. She replies: “Everyone knows this story, not only us. We didn’t come up with this story.”But, I point out, senior Hamas figures have admitted that members of the organisation carried out the killings.Hussein says: “I am not a politician, I am an ordinary man and didn’t hear of this story. The story that we know is that they died in a traffic accident.”

That is not to be taken lightly. It should be highlighted to show the fundamental difference between Israeli Jews and Palestinian Muslims.

RACHELLE FRAENKEL: We heard about the death of Mohammed Abu Khdeir. At first we couldn’t believe that it’s a hate crime. We thought something else might have happened. We were horrified. It stands against every value we live or educate towards. No parent should go through what we’ve been through. And especially not an innocent boy just walking through the street in Jerusalem. It is simply horrible.

It’s all there in the text, I know, and I don’t think it’s been deliberately buried. But the contrast is so great that rather than merely ‘being there’ for us to find, it merits a specific comparison. As it is, the whole concept of “The Lost Sons’ seems to be ”a message of hope”  like the Christmas truce, and the opposite of  what it ought to be.


In an ideal world the message should be “What is different” about the two lost sons, not a superficial “What’s the difference?”  between them.
Posted by sue at 12:25