I don’t suppose everyone will have watched all the Holocaust memorial programmes as assiduously as we have (chez Sue) There are several reasons why I felt compelled to watch every one. First, I wanted to know as much as possible about this unique historical event out of curiosity about ‘man’s inhumanity to man‘ and so on. Also, I couldn’t help switching on my  - what’s the equivalent of ‘gaydar’ - you know, the antennae that twitches at the whiff of anti-Israel propaganda.  Thirdly, I wondered how the BBC’s  coverage would stack up in comparison to ITV / Channel 4’s.

One thing I did learn, something I hadn’t fully realised before, was how thoroughly Hitler’s propaganda machine had succeeded in making ordinary German people regard Jews as subhuman. I mean literally. It wasn’t as if they saw them as subversive, threatening, greedy malevolent people. They actually stopped regarding them as people. Not human beings at all.
I’m wondering how many Muslims are affected by this sort of psychological manipulation. After all, there are numerous videos of radical Islamist preachers  translated by Memri showing that they regard Jews as ‘apes and pigs‘ despicable and subhuman.

I still feel a frisson of alarm at the way all Holocaust-related remarks must now be seen to be inclusive. There have indeed been other atrocities, genocides, massacres and examples of inhumanity, which we must all reflect upon and grieve over.  Somehow, though, we are all scared to let the callous and calculated attempt to dispose of a whole ‘people’ and a specific racial prejudice that has never been fully explained, be considered unique. But it is.
The coverage of the Holocaust memorial day was pretty damned good. But I don’t think for one moment that it will make the slightest difference to the flibbertygibbet BBC.

Here’s something that kind of makes my point for me. (Thanks H/P.) The BBC, in its ratings-driven quest for exciting telly, has elected to invite George Galloway to appear on Question Time on February 5th. Imagine! It’s coming from Finchley, and even the Guardian recognises that this is at the very least ‘insensitive’. 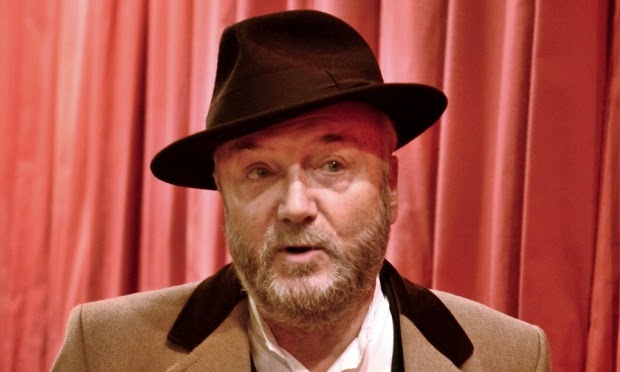 We all know that Galloway refused to debate with an Israeli, and that he called for Bradford to be an Israeli-free zone, so any Galloway supporters who claim that opponents of their hero’s forthcoming Q. T. appearance are trying to suppress ‘free speech’ haven’t got a leg to stand on. But they’re still trying.

The slimy toad is astute enough to tailor-make his QT appearances to suit the occasion. For Q T, and Q.T. alone, he generally poses as the voice of reason, which doesn’t actually make for excitement.
The BBC says:

“Whilst Mr Galloway’s views are entirely his own, as an MP he has a right to appear on the programme and has done so previously. Subjects for discussion are chosen by our audience ahead of each show and this edition of Question Time will be no different.”

Gene at H/P has suggested we bombard the BBC with the suggestion that they invite Eylon Aslan-Levy on to the panel. Now that would make exciting telly.
Posted by sue at 12:05