A post featuring everyone's favourite, Yasmin Alibhai Brown. How can you resist? 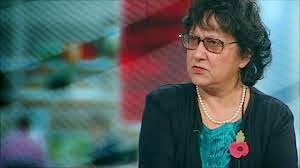 Today's Dateline London was a largely consensual affair, unfortunately. (Not entirely, but largely.)

Instead of describing it in detail, I'll just transcribe bits of it, to give you a flavour of it.

However, in advance of that, here's a pre-warning...

Please watch out for Marc Roche doing the Guardianista 'society's to blame' thing to excuse young French Muslims for their anti-Semitism.

...and for Yasmin AB doing her thing and outrageously equating UKIP with Islamist terrorists...

...and, thanks to the BBC's Gavin Esler and his panel, getting away with it...

...and for the bit when Gavin and Yasmin get together to bring up Oklahoma and damn the hasty imputations of Muslim responsibility without reminding BBC viewers that there have been plenty of examples in the other direction (including from the BBC), and that the Oklahoma/Breivik example should, perhaps, be considered the exceptions that prove the rule.

And as for the final discussion on the party election debates, as they used to say on Jerry Springer..."Don't even go there!"

Marc Roche: I think, aside of anything, it shows that we haven't really got to understand why so many young Muslims, men, feel ostracised in Western society.

Thomas Kielinger: Germany is a different kettle of fish already. The country, to me, looking from here, appears so...almost not part of the modern world. There are so many people in Germany which is still riven by xenophobia because they find living side by side with other cultures and religions goes against their Christian beliefs. Apart from a metropolitan area like Berlin, in many parts of the country they just do not accept the fact that we live in a multicultural environment and that we have to accept the toleration of other religions and so forth...

Thomas Kielinger: The [German easterners] are so used to having their lives taken away from them and now...It used to be the communists and now they accuse Islamism of taking away their identity.
Gavin Esler: Although in many of these areas there aren't that many Muslims!
Thomas Kielinger: Absolutely, which is funny that they should suddenly carry the banner of "anti-Islamisation" and so forth, which is just so irrational, which to me just seems to reveal that there are sections of society which haven't yet accepted the modern world in which we live, and they have to really learn, they have to be educated the world has changed.

Yasmin Alibhai Brown: There's a fantastic bit in the Koran which said...and I can't remember the word for word...'When people are disrespecting your religion in front of you, move away'. This is in the Koran, for God's sake! But they're not interested...It's part of hating modernism. As do the UKIP people. As do all the extreme-right-wing people. They have much more in common than we seem to know, than we seem to be imagining.

Greg Katz: Unfortunately in the United States, assault rifles are generally available. So you get two or three people in a foul mood. They can get those rifles and they can attack a mall in St Louis.

Marc Roche: It's very simple. If you say 'anti-Semitic' in France today, it's part of the young Muslim disenfranchised youths who see Jews as an example of success in French society. The only way you'll solve that is to get them out of poverty.

Some credit, perhaps, must be given to the almost-invariably-absurd YAB for pointing out, in contradiction to MR's old-fashioned leftist point about poverty and disenfranchisement being the root cause of Muslim anti-Semitism, that in the UK lots of comfortably-off Muslim families have dispatched family members to perform jihad [not that she quite put it like that] - and for really giving Saudi Arabia a good whacking.

However, she then lost some points for blaming the West's obsession with oil for exacerbating the problem. (Low oil price? U.S. Fracking?)

And, on the Saudi front, it's probably wise to bear in mind that she might, just possibly, have a sectarian interest, being a Shia Muslim.
Posted by Craig at 16:37