I almost forgot to mention...

When the BBC's since-hastily-changed Editorial Guidelines banning any depiction of "the Prophet Mohammed" became widely-known just over a week ago, I found (in passing) the answer to a question I've vaguely wondered about for years.

I once did a major study of a BBC Education correspondents reports, ploughing through scores and scores of them.

Given that most of her articles had accompanying images, I began to notice that a large proportion of them used stock photos of school pupils and university students.

What was interesting about them was that they tended to feature an ethnically diverse range of children; indeed, they did so so often that I assumed there had to be an official BBC guideline stipulating that it must be done. 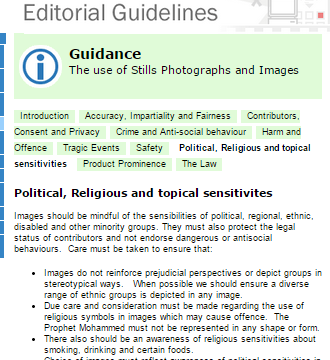 Well, as you can see from that now-deleted (but still cached) BBC Editorial Guidelines page, there was indeed such an editorial guideline:

When possible we should ensure a diverse range of ethnic groups is depicted in any image.

Wonder if that's been deleted too (baby with bathwater)?
Posted by Craig at 08:59