What the BBC's Arab Editor thinks 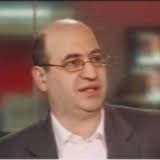 Another striking catch from Biased BBC's DB on Twitter:


Netanyahu's relentless call for Jews of the world to immigrate to #Israel gives ammunition to extremist ideologies in the region
— Bassam Andari (@Bassamandari) January 18, 2015


#Israel maintains that it is a democratic state. Why is it concerned about the Palestinians joining the #ICC?
— Bassam Andari (@Bassamandari) January 3, 2015

Which military training manual suggests that if civilians are used as human shields it's fine to wipe them out? #Gaza #justasking
— Bassam Andari (@Bassamandari) July 20, 2014

And who is Bassam Andari? Well, his job title is "Editor, Newsgathering and Planning, BBC Arabic at BBC World Service" and his role is:

Leading the Newsgathering operation for BBC Arabic, the biggest language department in the BBC world service with its unique multimedia offer (Radio, TV & Online).
I'm in charge of assignment, planning, correspondents and foreign bureaus and logistics.