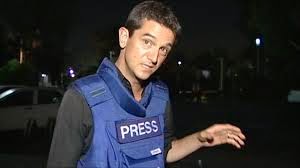 Today's 'chief correspondent' Matthew Price has appeared on Is the BBC biased? before.


We first encountered him (via DB at Biased BBC) recommending an article delegitimising Israel.
Then we described his extraordinarily biased series of pro-immigration reports for Today.

This morning's Today (around the 7.45 mark) featured a Matthew Price report from the Parisian suburb of Sarcelles.

It was an elegantly-constructed piece, full of poetic touches. It described and equated two equally vulnerable communities in France - French Jews and French Muslims. Both want to live in harmony, but both are fearful now. Both have guards outside their places of worship.

Everything in the report was clearly intended to suggest a parallel and equivalent problem.

What you didn't get from Matthew's report was any mention of the fact that it was French Muslims who targeted and murdered French Jews last week.

In Matthew Price's defence you might say that that's too obvious to need stating, but the absolutely staggering thing about this report is that this omission wasn't the only omission.

Unlike most Radio 4 listeners, I know - and, probably, you know - something about Sarcelles (Matthew's mint-scented, tense but harmony-seeking Parisian suburb), something that the BBC reporter completely 'forgot' to mention: It was the scene, only last year, of violent anti-Semitic riots by local Muslims chanting "Death to Jews" and "Slit Jews' throats".

There's no equivalence, despite what Matthew Price says. Jews are under attack in France, and it's Muslims who are doing the attacking.

If you fancy defending the BBC here, please take a listen to that report and tell me where it informs Radio 4 listeners about what happened in Sarcelles last year, and then try to explain why Matthew Price failed to mention those anti-Jewish riots.
Posted by Craig at 16:10