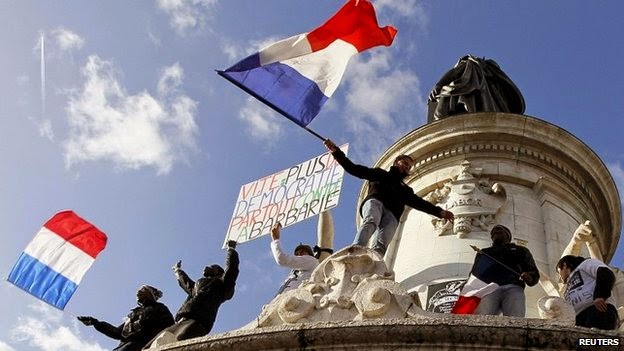 With all the attention being paid to the reactions of French Muslims to last week's terrorist murders in Paris, it's good to see that the BBC News website has finally got round to publishing an article focusing on French Jewish reactions: Paris attacks: Jewish and French, written by the BBC's Patrick Jackson.

The piece is a transcription of a tweeted conversation the BBC reporter had with two Jewish students yesterday, just before the Paris march.

They express their pride in the French reaction to the massacres and their love for France's values, diversity and culture. They describe incidents of violence and anti-Semitic abuse but say that those dangers only exist in some Parisian neighbourhoods. They are keen to point out that not all low-income parts of Paris are dangerous for Jews.

Given that they are the only two French Jewish voices whose views are being prominently promoted on the BBC News website, however, it's especially striking that they also express views which seem to chime closely with those most associated with the BBC - being strongly critical of Israel, stressing the positive Muslim reaction, denying that the attackers were Muslims, and fearing the far-right.

Is it too cynical to think that this one conversation - out of the many such conversations BBC reporters will probably have had with French Jewish people over the past few days - might have been chosen for publication on the BBC News website, and given such prominence, simply because Gabriel and Raphael's views reflect those of the BBC so uncannily?:

Q: Last year there was record migration of French Jews to Israel. Can you ever see yourself joining them?
Gabriel: Only if France loses the values we talked about earlier.
Raphael: I will never go to Israel other than as a tourist. I don't feel linked in any way to the state of Israel. I strongly disapprove of the Israeli government's policy towards the Palestinians. If I have to emigrate it will not be to Israel.

Q: Have the attacks of this week changed your attitude towards your Muslim countrymen?
Raphael: Not at all. The images of the Muslim cop being gunned down were heartbreaking and the attitude a lot of Muslims took is one reason I am so proud of my country. If anything has changed, it is change for the better.
Gabriel: I don't feel the attackers were Muslim at all so what they did can't change what I feel about Muslims.
Raphael: Just two concerns. I fear these attacks may help Marine Le Pen and I don't want a French Patriot Act.

As we've said before, often it's the editors and sub-editors at the BBC website who seem to project their own biases most strongly on BBC articles.

The one behind this article, for example, decided to ignore Gabriel's point that Jews could be "assaulted" as well as "insulted", and chose the sub-headline 'Name-calling' - which seems to rather downplay the risk.

That editor/sub-editor also chose to bring out one particular message by selecting one quote from article - the one praising French Muslims - and placing it in bold block quotes to the right of the body of the article, and by choosing an image of a placard that read "Je suis Musulman" as well as "Je suis Juif".

There's a definite intent behind such editorial choices, isn't there?
Posted by Craig at 14:41