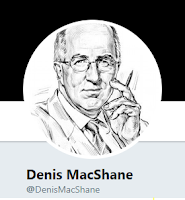 He was always - and remains - a strong Europhile, and has a book out now called "Brexit, No Exit. How (in the End) Britain Won't Leave Europe".

He rather gave their real game away though as far as such criticisms are concerned when he said a couple of days ago, "The complacency of the London pol-media-biz establishment esp BBC that referendum couldn't be lost was remarkable".

He wants the BBC to stop being "complacent" and become even more engaged in the fight against Brexit.

Denis is, of course, never able to disguise his pleasure when a BBC programme does exactly what he wants the BBC to do. He's long been a fan of Mark Mardell and his The World Thjs Weekend, for example and, Chris Morris's Radio 4 series Brexit: A Guide for the Perplexed has proved to be another  such programme:

Having heard Brexit: A Guide for the Perplexed I can well guess why Denis MacShane enjoyed it so much. Denis MacShane could pretty much have written it himself.
Posted by Craig at 08:43