London - A City in Flight (Updated)

Science Fiction writers and Futurists have long conjured with the possibilities surrounding Cities in Flight. An early version of the theme, later to be taken up by science-fiction writers, dates back to 1928, the year of Stalin’s first 5-year plan. Georgii Kruticov, a Russian student of architecture  envisaged a city-sized nuclear powered apparatus such as his illustration: 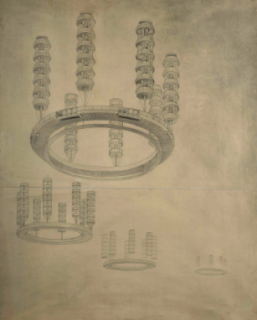 The idea was seized upon by the generation of mid-century Futurist Dreamers including writer James Blish, who explored the theme during the 1970s in his Cities in Flight series. Here, with the help of anti-matter, complete cities were able to cut themselves free and blast off in order to go it alone in the universe, leaving behind the encumbrance of a dystopian world. At roughly the same time the great American visionary architect engineer and philosopher Richard Buckminster Fuller was proving that these machinations of cities floating above the earth were technically possible by a combination of hermetically sealed tensegrity structures and temperature control. His project  Cloud Nine envisaged huge spherical assemblies tethered to the ground: 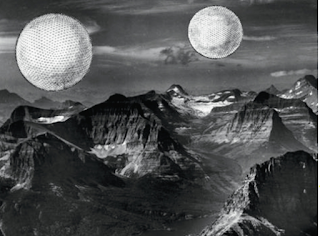 With advances in technology, these early schemes have their recent manifestations, such as an airborne city visualisation from the architect Tiago Barros - Passing Clouds: 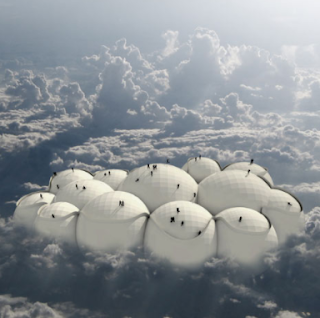 There is a strong similarity of this image with that of high-rise London buildings poking through the clouds: 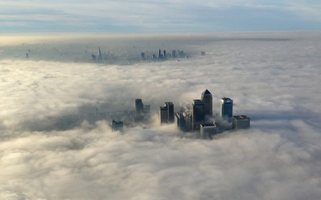 What could be easier? A flight into London City Airport, a short hop, an elevator up to the top floor of No. I, Canada Square, and you’ve arrived! Should you stay there, or should you move on to another location above Paris, Rome or New York - or, of course, Brussels?

One of the most recent and vivid iterations of this concept is described in a book by Philip Reeve, Mortal Engine. Here, an idea that London has become acquisitive and uses its new-found capacity for flight to plunder other cities and strip them of their material assets, in a world where, as Buckminster Fuller insisted, resources were finite. The main theory of Municipal Darwinism as described by Reeve, is a predator and prey cycle; if the bigger town is faster than the smaller, the smaller town will be eaten. it's a … game which refers to the fact that the society that engages of Municipal Darwinism is not actually a sustainable means of living.

Reeve was required to dumb down his first drafts. From Wikipedia:

… The original drafts were intended to be an adult novel, but after several rejections Scholastic said they might be interested in Mortal Engines as a children's story. In the refactoring the story was simplified, removing several characters and much content Reeve thought would not be interesting to children (city politics)…

In fact, it is the ‘city politics’ aspect of the above that has the most relevance to this post - hence the title: London - A City in Flight. The idea that the BBC promote to overseas listeners that ‘London is the UK, and the UK is London’ is becoming more evident as time passes.

What better metaphor is there than  A City in Flight to represent the BBC and London? Set aside the physicality of the above fictional floating worlds, and we see that this Cloud Nine sphere already exists and is here with us.

Blish’s anti-matter, which in his factional account allows a city to break loose from the clutches of their host nation, has an equivalence in fake-news post-truth routinely biased reporting - chiselling away at our reliable anchor of democracy. What goes on within this hermetically sealed environment cannot be seen by outsiders, whose opinions are routinely disregarded - it floats unaccounted for above the reality of our traditional existence.

The metaphor can be broadened to include the whole privileged group of the London political elite, these beautiful multiethnic cool people who are welcomed onto Cloud Nine. Their voices are the only ones heard. They live amongst friends in harmony with like-minded folk - secure in the knowledge that they are safe from physical danger and are insulated from unwelcome intrusions.

Should there be an attack in any form which questions the tribal narrative of their brave new world, then they have overwhelming firepower at their disposal to fight off any challenge. Even the well resourced outsider can expect to succumb to comprehensive obstruction. As a publicly funded organisation, they are stronger than any political party, able to make or break reputations, and adjust or even rewrite history by distorting facts - by use of a supreme control over what information is released.

Again, the physicality of warfare has become out-dated, and is replaced by the launch should it be necessary of an unmatched awesome communications onslaught which leaves no chance of retort. Complaints are pointless as they become blunted and forgotten about by specialist information shufflers. From within the cloud, an elite group of interviewers deliver propaganda messages, carefully scripted for them by an army of role-play modellers. In cases where their chosen Leaders can’t be trusted to carry the message successfully, a video is produced which will deny viewers any possibility of reply or further questioning.

Away from the science fiction to the here and now. In the UK, we are ominously close to the fulfilment of this aforementioned nightmare. The occupants of Cloud Nine are being gathered together, tested and approved of by the BBC and their Government of choice - a Corbyn McDonnell led hard-left Labour one. We have seen over the last week or two how they plan to protect their man by refusal to investigate Corbyn’s past allegiances, which might have sent shock-waves through a well-informed electorate. The BBC are in charge of admission to the cloud and will only allow like-minded politicians. public service heads, fellow broadcasters and journalists, charity chiefs, lobbyists of the right hue, left-wing actors and comedians etc through their gates.

There’s an intriguing and enduring ambiguity to all this. As far as I know, it’s not clear as to whether Georgii Kruticov’s 1928 vision of a City in Flight was intended as a means of escape from the tyranny on the ground below, or whether he saw the same vision as a potentially menacing instrument of hard-line state control.
Posted by Craig at 20:02