All the weather that's fit to repeat 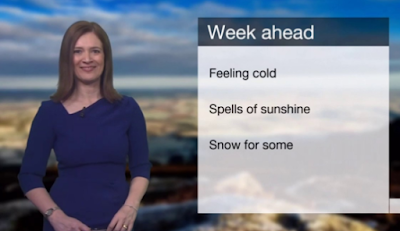 Talking about winter, The Sunday Times is having a little fun at the BBC's expense today, saying:

The snow that brought chaos to parts of Britain largely stopped falling yesterday but no one told the BBC. As America marked Groundhog Day, the broadcaster created a time loop of its own, accidentally replaying Friday’s weather forecast on an early-morning bulletin.

Echoing the Hollywood film, a television weather presenter, Alina Jenkins, relived events of her previous 24 hours, promising “sleet and snow showers piling in . . . on Friday” — in a 5.55am broadcast.

The BBC said in response:

We inadvertently ran yesterday’s forecast in one of our early morning weather slots.

Wonder if the Corbynistas or the #FBPE brigade will spot an anti-Corbyn, pro-Brexit conspiracy here?

Meanwhile, who knew that BBC weather forecasts aren't always presented live but sometimes recorded (hence this latest honest mistake)? I have to say that I didn't...but I do now!
Posted by Craig at 07:42