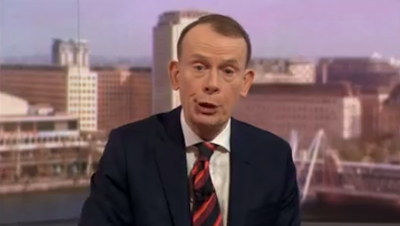 So, when do we leave the EU? Next month, the government insists. Depending on how we leave, there's lots of talk about what that might mean for food, for jobs and health. But what about our security? Important and proper questions have been raised. And meanwhile, we are going through an alarming rise in some serious violent crimes. To put it bluntly - can we trust this Government to keep us safe?

But that wasn't half as striking as what preceded the paper review, when he launched into what some uncharitable types have described as 'a rant':

We are going to talk about the papers in a moment with Fraser Nelson from the Spectator, Kate Devlin from the Times and Ash Sarkar from Novara Media. But before we do, I just want to say one thing about our line-up of interviews. We are at a moment when negotiations with Brussels are absolutely critical - and it's been a long moment - and week after week I get the chance to cross-question British ministers and opposition politicians. And week after week we ask the likes of Donald Tusk, Michel Barnier and Jean-Claude Juncker to answer questions as well. And week after week they say no. We try. We keep trying. And so to the papers...

Wonder what brought that on?
Posted by Craig at 11:07