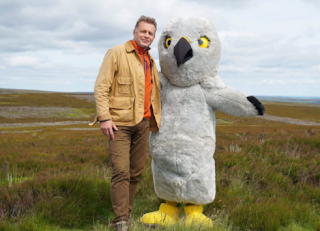 Talking about Chris Packham, you may have missed this story, as it only appeared in The Daily Mirror:

EXCLUSIVE: Lobbyists for groups who shoot grouse claim TV presenter Chris Packham didn’t declare a link to a drug company on a variety of BBC shows

The story is that pro-hunting groups have alleged that Chris Packham, famously an outspoken opponent of grouse-shooting, broke BBC rules back in 2015 by using BBC platforms to publicise a dog tick treatment he has links to:

Abzed, a company which lobbies for grouse-shooting, claimed Packham was employed by a PR firm representing MSD Animal Health to help sales of its ­insecticide Bravecto.

It alleged he did not declare that interest while appearing on BBC shows in 2015 to speak about the “Big Tick Project”, a campaign which raises ­awareness of ticks on dogs.

Here's what the two sides are saying:

I guess his critics will need concrete evidence (TV footage, transcripts of his TV appearances openly "plugging" the product, etc) to  substantiate their allegations. If they can find that and prove that he pushed Bravecto on various BBC platforms then Chris Packham will be in deep trouble. If they can't, then the charge that they are smearing him and want to get him sacked because of his opposition to grouse-shooting will continue to appear credible.
Posted by Craig at 07:26