Maladministration at the top of the European Commission - ruling 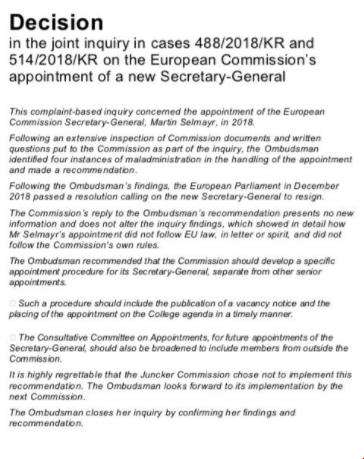 I spy breaking news, though it must be said mainly on my Twitter feed...

Emily O'Reilly, the European Union's chief ombudsman (elected by the European Parliament), has slammed the European Commission for ignoring its own rules when appointing Martin Selmayr as Secretary General of the Commission last year.

Mr Selmayr, as you probably know, is playing a highly controversial role in the Brexit negotiations.

The European Commission has (in the usual way of such things) rejected her findings. Apparently, she's not been fair!

So Big News then about EU maladministration at the very highest level - something that's of obvious relevance to the ongoing EU membership debate here in the UK.

It will be interesting to see how the BBC reports this. So far there appears to be nothing.

The likes of the Daily Telegraph and the Daily Express (as well as Politico) have reported it quickly - as you might expect.

So will the pro-Remain media, including the BBC, try to squash this story?

Lead story on tonight's BBC News at Ten anyone? (No, me neither).