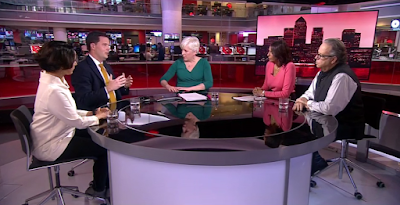 People watching Dateline London and commenting on it whilst so doing are usually politically-partisan twitterers - or fair-minded bloggers.

They were aghast that he was on and are screaming 'BBC bias!'.

Yes, some of the loudest anti-BBC, left-wing mouths on Twitter have been in action, as ever expressing their views in their own distinctive ways.

And when the discussion turned to Venezuela, and criticism of US foreign policy flowed, and everyone (including the estimable Ms Gracie) piled in on Alex Deane to stop from him criticising Jeremy Corbyn (and even defended the Labour leader against Alex), one of those loudest Twitter mouths turned potty-mouthed and declared (for the 500th time) that the BBC can go away in no uncertain terms and shove the licence fee up their police state posteriors for being so right-wing because he's not going to pay for such faecal output anymore [I may have toned it down somewhat there], while the other one opined that Carrie Gracie was "desperate" to "steer Tory discussion" of Venezuela against Chavez and Socialists and that she "allowed" attacks on Corbyn by "Far Right Alex Deane", with "no right of reply" - something that could hardly be further from the truth.

Of course, such Twitter foolishness should be neither here nor there, but it's symptomatic of the behaviour of a certain, very loud kind of BBC critic who strikes a chord with a small but influential subset of the population.

And, given the oft-cited 'complaints from both sides' argument, it remains important to point out that it doesn't hold if one side's complaints are utter drivel.
Posted by Craig at 13:00