Especially for those of you who don't use Twitter...It's really easy to click on a random tweet that various algorithms forward in your direction. And, yes, I clicked on one yesterday morning. It came from this fine, upstanding-looking fellow: 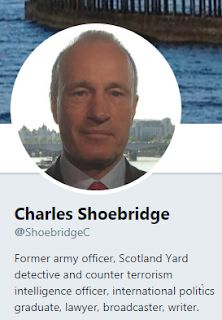 Watch UK foreign secretary yesterday betray an astonishing apparent ignorance of the Cold War period by telling the people of #Slovenia they were once a “Soviet vassal state”, ignoring that the former #Yugoslavia was ferociously non aligned and independentpic.twitter.com/iLPC529d7U
— Charles Shoebridge (@ShoebridgeC) February 22, 2019

Now, as a BBC-watcher, what really caught my attention here was that Mr. Shoebridge went on to predict that the mainstream media (including the BBC) would not report Foreign Secretary Jeremy Hunt's embarrassing blunder in stating, in the very presence of the Slovene leader, that the former (Titoist) Yugoslav republic Slovenia was a "Soviet vassal state".

And, by and large, Charles hasn't been wrong, has he? (Yes, I've checked).

Now, the odd thing here is that Charles Shoebridge turns out to be a left-wing, Craig-Murray-type and that he's going at this from the 'the BBC is a state media lackey of the US/UK military-industrial complex' angle...

...while, in contrast, I'm going at it from the 'Well, the BBC would have gone absolutely haywire and made this headline news for days if ever their pro-Brexit bogeyman Boris Johnson had commited such a spectacularly historically uninformed gaffe' angle.

Anyhow, I have to say (and I sincerely thank myself for so doing) that I still think that I'm nearer the truth here that the esteemed Charles, and I'm presently toasting myself in consequence, in true John Sweeney fashion, with a flaming sambuca on BBC expenses. (In reality, an under £5 Pinot Noir from Aldi).

But, in fairness - and I'm sure Mr. Shoebridge will appreciate this - at least the eternal flame of the true spirit of the BBC (alongside the mighty John Simpson) - namely veteran BBC reporter Hugh Sykes - is on the present Foreign Secretary's case, agreeing (on Twitter) with a professor that poshly-educated Mr. Hunt may have graduated with first class honours from one of the twp usual posh universities but that - in BBC Hugh's words - Mr. Hunt is "clever but not very bright".

And by a remarkable coincidence, Mr. Shoebridge also cropped up related to other story getting the Media Lens end of the internet (including Mr. Shoebridge) excited: "BREAKING: BBC journalist confirms the Douma chemical attack was staged by the White Helmets. The US bombed Syria over this".

Riam Dalati's job title is "BBC Syria Producer". He often works with Quentin Somerville, and both Quentin and Lyse Doucet have been tweeted for their reactions to this. (They've not responded yet): 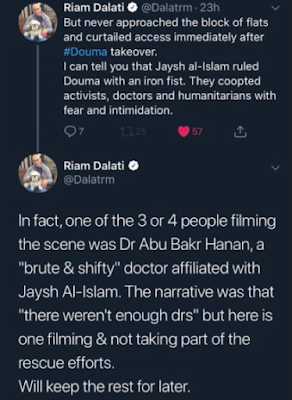 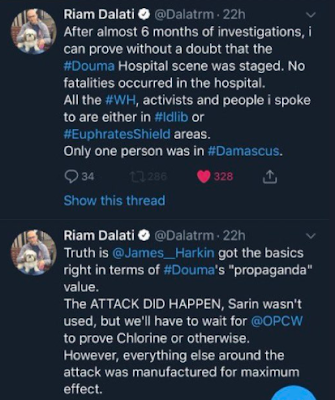