My heart sank a tiny bit when I saw that Ayesha Hazarika was on Politics Live (again!!) (30:38) but I cheered up a little when I realised that Camilla Tominey was on as well.

To her great credit, (Ayesha that is) gave a cracking speech  - a  mini-rant - about last night’s PLP antisemitism debacle. I don’t know if she was present at the meeting, but she described the atmosphere  - I can’t remember the exact word she used and I can’t get iPlayer (or whatever it’s restyled itself as) to load, but it was something like “heated, toxic, fraught”. I might chase it up sometime.
Ah! The iPad will play the iPlayer. The word I temporarily forgot was ‘stormy’.

“Antisemitism has cast a great stain over the Labour Party” […] They have to do better - there was a very stormy meeting last night at the PLP where the General Secretary was under fire and I think - you know - we should not be defensive about this. We are the party of equality. We are the party of social justice. We take anti-discrimination - incredibly important (sic)  and we can’t have a hierarchy of racism in our party, we have to take this seriously.[…]

and not attack people who raise the issue of antisemitism - so many, particularly Jewish MPs, have been hounded on social media by Corbyn supporters saying, “oh you’re weaponising antisemitism” - that is a gross insult particularly when we’ve just celebrated, you know, Holocaust Memorial Day.”

I happened to be watching Sky yesterday - not my choice -  but, you know, ‘democracy’, and there on the screen was Ash Sarkar discussing “Fake News’ with Dermot Murgnathingy. She was sitting beside ex-BBC Head of news and Current Affairs James Harding who was there to plug his new ‘slow news’ project, ‘Tortoise’ or some such.

Both men were exceedingly deferential to Ms Sarkar. I can see why. She’s very articulate - talons a-flailing - and full of passion. Everyone seems to want her on their show.

You never know though. As Grant Shapps MP joked mischievously on Politics Live, (and somewhat inappropriately directed at new gal on the block Dominique) "young, black and….Conservative!!!" by repeating that well-known philosophical remark attributed to Churchill: “If You Are Not a Liberal at 25, You Have No Heart. If You Are Not a Conservative at 35 You Have No Brain.”

Hmm. How old is Ash? About 26 I think - (going on 40) so maybe she’ll come to her senses in seven or eight years or so. Then she might be worth deferring to.

Did you catch that cringeworthy tete-a-tete (via old fashioned telephone) between Congresswoman Alexandria Ocasio-Cortez and Corbs? Maybe Jezza’s star is on the wane. First Venezuela, now this. It’s quite a big story everywhere but the Beeb. 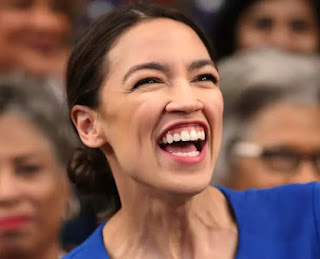 Or maybe it’s just the BBC’s obstructive search engine. I wouldn’t put it past the BBC to make that, as well as BBC Sounds, inaccessible just for me.

Update:
I’ve just seen the kind of thing that must have inspired, or contributed, to Ayesha Hazarika’s outburst. Remarks made by prominent Corbynista Chris Williamson MP.  BBC Watch has this:

“He said rows over Corbyn’s handling of antisemitism within Labour and his approach to Venezuela were “proxy wars and bullshit”.

“I’m not saying it never ever happens but it is a really dirty, lowdown trick, particularly the antisemitism smears. Many people in the Jewish community are appalled by what they see as the weaponisation of antisemitism for political ends.”