From the Dark Side of the Moon

On the same theme, here's more of the past week's big BBC bias rows - from (scary music) 'the other side':

During the closing headlines of Wednesday night's BBC News at Six black and white footage of a spitfire landing and other spitfires in flight were accidentally broadcast as newsreader Sophie Raworth summarised the Prime Minister’s plan to reopen Brexit talks with EU leaders.

Many laughed at this, but others didn't see the funny side and accused the BBC of doing it deliberately.

Yes - as the Guardian reports - the BBC was being accused of staging a pro-Brexit stunt. [Yes, I know!].

The programme's editor Paul Royall then sent out a tweet saying it was an honest mistake:

For those wondering - simple human error at end of #BBCNewsSix. A production mistake meant pictures used earlier to tease story about Biggin Hill ended up in our top story recap at close of show. If and when it happens pretty certain PM not travelling to Brussels like this.

The strength of conspiratorial thinking about the BBC among the wilder pro-EU types (especially on Twitter) is very striking, showing that many have become highly radicalised.

As you'll see from the replies to Paul Royall, a lot still won't accept his perfectly reasonable explanation ("Oh. An "accident". Right"; "Too bloody convenient an answer"; etc), while others want an apology rather than "a mumbled excuse".

Here's a particularly interesting response (and one we might also sympathise with):

It might have been a simple mistake. But a lot of people were incredulous and thought it was deliberate. That should worry you. Your explanation should be an apology. But then again BBC news does not do apologies, do they? Just carry on regardless.

Another conspiracy theory among #FBPE types raged after Conservative MP Mark Francois's appearance on Politics Live, where he made 'Germanophobic remarks' in relation to Airbus boss Thomas Enders and then ripped up, live on air, a copy of Airbus's dire warning about Brexit - a stunt that surely took the BBC unawares.

Or not, as the case may be, for as Samira Ahmed said  on this week's Newswatch, "Some people felt the BBC was party to a stunt by letting him rip up that letter from the Airbus chief executive on BBC airwaves".

The BBC boss appearing on Newswatch, Sam Taylor, denied that the BBC had "choreographed" it, saying it was "just another interview with a politician".

I believe him, but he then went and spoiled it all by saying something stupid - i.e. by playing the "we get feedback from people on both sides of the argument" card.


No, not that FionaBrucegate, but another one.

After the Diane Abbott 'scandal' had aroused the fury of the hard-left Corbynistas two weeks ago, the very same edition also aroused the later fury of the #FBPEs and the Cadwalladristas, headed by clan chief Carole Cadwalladr herself - and they've been banging on about it even since:


Fiona Bruce corrected a viewer on BBC QT who said Leave ran a ‘dirty’ campaign to say there were ‘questions on both sides’. It made a false equivalence between illegal acts and politically motivated criticism. Its refusal to acknowledge this is gobsmacking and depressing. BBC journalists, what do you think? This is not a criticism of Fiona Bruce but of the BBC’s seemingly limitless inability to recognise mistakes and correct them. You know the rules. How is this not in breach of 3.2.2, 3.2.3 and 3.2.4? Can anyone explain?

Where Carole leads, legions of devotees always follow - like cats on hearing a Whiskas sachet being opened (h/t Andrew Neil). And she received this reply from the BBC's fabulously complaint-denying complaints department: 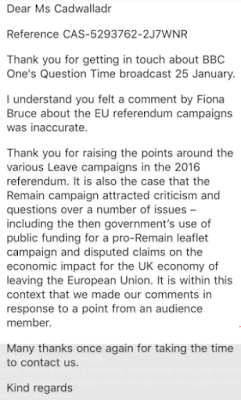 So what was said on QT?


Audience member: I feel that people did not have the information, didn't have the right information and the Leave campaign was such a dirty campaign...[Boos from the audience towards the audience member]...It was, it was. And so I really think people need the full facts, and II don't think any of us have the full facts in the room and no one really knows...
Fiona Bruce: (interrupting) I mean, in fairness, there were questions over both the Leave and Remain campaigns. Diane Abbott, let me come to you...

Hmm. Well, I'm with the BBC complaints department minion here, as Leave were massively outgunned during the Referendum campaign and Remain weren't averse to making massively false statements on myriad occasions, so I think Carole is climbing up the wrong Christmas tree, but, it must be said, Carole and her army remain deeply dissatisfied with the BBC here and, like cats with mice (h/t Andrew Neil), they really aren't letting it drop.

Oh Fiona, QT really isn't like The Antiques Roadshow, is it? 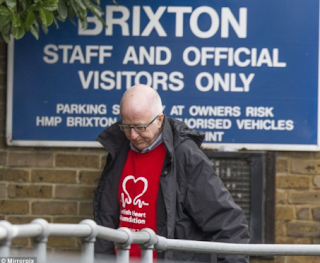 He may have been caught out by the law (and jailed for six months), but strongly pro-EU former Labour MP Denis MacShane remains a canny man, and he's been busy this week complaining to the BBC about a Dominic Raab/Nick Robinson interview on Today.

Denis and his Twitter followers believe they've totally disproved Mr Raab over the Swiss-EU border and feel that the BBC (in the form of Nick R) failed to hold Mr Raab to account over his "lies".

Though being somewhat lost in the detail (and willing to admit I could be wrong), I think Denis and his followers appear to be right about the Swiss-EU border being far less frictionless than Mr Raab said it is.

Mr MacShane, however, then almost ended up defending the BBC against his more enthusiastic #FBPE supporters. They wanted the 'BBC conspiracy' angle. He preferred the 'BBC ignorance' angle.

And maybe it's true that Nick Robinson doesn't know anywhere near enough (as a star BBC presenter/reporter) about the Swiss-EU border.

There's a lot of ignorance about at the BBC.
Posted by Craig at 17:09