How could I have not realised?

I suppose one of us ought to gather together a word or two about Question Time. Fiona Bruce has had time to settle in.
At first, I thought her interventions were pretty un-chairmanlike. She seemed to want to be a participant, rather than ringmaster. Perhaps it’s that she sees her role as a one-man adversary - as if she has to vanquish all five guests all by herself, like a black-clad Clint Eastwood strolling manfully into a bar and felling the whole bar-full, single-handedly.

Then again, some of her interventions were okay. I don’t think the chair should allow any of the guests to ramble on interminably or say something outrageous without being properly challenged.

Last night’s edition didn’t seem at all promising. I wouldn’t have bothered to stay up for it, but I happened to be awake, and I did watch it, even though I knew it would be about Brexit, and worse still, Scottish Independence.  There was no-one on the panel to spark up much in the way of anticipation - mainly because none of them were household names, exactly.

The audience were the ones who brought some excitement to it, and I have to say that Fiona’s schtick is to bring the audience in from the get-go, so that they’re full participants, so to speak. They certainly livened things up as far as critiquing the SNP is concerned.

I Googled Q.T. this morning just to see what impression it had made on the blogosphere. Up came the Daily Express. Who reads the Daily Express? As far as I could see it’s mainly celebrity gossip about nothing and considerably dumber than the Daily Mail. But the Daily Express went to town on last night’s QT. 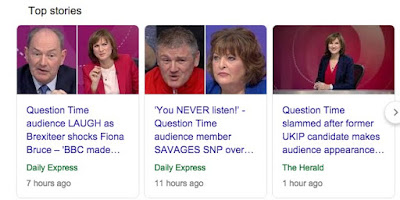 Anyway, this caught my eye; the bit when Fiona got shirty.

Tory peer Baron Forsyth told the BBC audience in Motherwell in Scotland that the Irish border was not an issue due to there being no desire for a hard border by both the UK and the Republic of Ireland. BBC host Fiona Bruce asked why the Irish border was not mentioned during the Vote Leave campaign, to which Baron Forsyth replied and insisted it was not an issue. Lord Forsyth added: “It’s an issue by those people who are trying to reverse the result of the referendum.”

“The BBC audience laughed at the Brexiteer’s claim as the BBC host added: “But what do you think about the response you get from the audience when you say that? People are laughing.”

Baron Forsyth fired back: “I think it’s because they have been listening to the BBC who has made this an issue when it is not an issue.”

Ms Bruce responded: “Oh, it’s our fault. How could I have not realised it is the BBC’s fault?”

The Tory peer responded and said: “I can help you.”

But in response, the BBC host chuckled and said: “I might pass on that if you don’t mind.”

The bit where she said:

“Oh, it’s our fault. How could I have not realised it is the BBC’s fault?”

was indicative of the BBC’s arrogant attitude to criticism. Fiona kind of ‘acted it out’ in the way she does. Just the way she said it was priceless. Someone should make it into a gif, for posterity.
Posted by sue at 15:56