An exchange of views

The "comical" nature of the first few versions of the report is made even more worse by the fact that the first three versions (the ones that don't tell you Mr Northam is a Democrat) mention "the Republican Party of Virginia".

Indeed, reading the original three versions of the report, I suspect most readers unfamiliar with Governor Northam would simply assume he was a Republican from the way the BBC wrote those versions.

Maybe one of that bevy of BBC beauties who DB copied in to his complaint had a hand in the report though, because the next update did introduce the word "Democrat". (Coincidence?).

The headline, however, is sticking with 'Virginia Governor Ralph Northam sorry for racist yearbook photo'.

To his credit, one beauty - Jon Sopel - replied to DB's tweet (though quite what he's "disagreeing" with in his first reply isn't clear!):


Jon Sopel: He’s a Democrat. There. And I disagree. I think the fact that he is a Democrat will intensify the pressure on him from liberal groups to fall upon his sword.

DB: It doesn't say so in this online report: https://www.newssniffer.co.uk/articles/1732817/diff/1/2 … If he was Republican the headline would say "Republican Governor..." and it would be mentioned again in the opening paragraph. 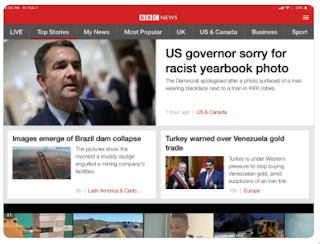 DB: But the actual report doesn't.

Anyhow, the front page of the BBC website (as accessed here the UK), as of 7 o'clock this morning, does not prominently say he's a Democrat: 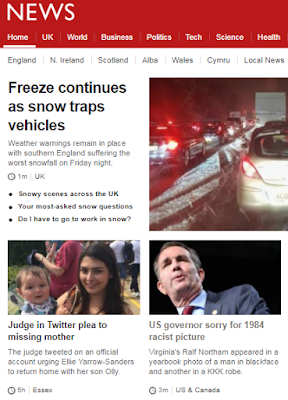