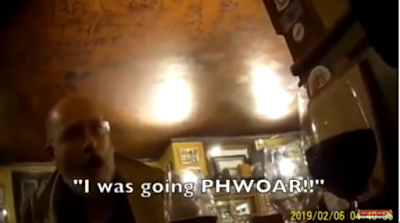 Fans of Panorama/Newsnight star reporter John Sweeney will doubtless already have seen this. But,  for those who haven't, here's the freelance BBC man being ultra-non-PC.

And, even better, he's being ultra-non-PC about an ultra-non-PC piece of behaviour by himself - yes himself! - many years ago in deepest, darkest Iran.

Well, in the new video John Sweeney is obviously as inebriated as a heavily-tanked-up great crested newt and is busy trying to impress a lady who he's evidently taken out on the lash (via the BBC licence fee payer of course) evidently in order to help him and Panorama trash the famous Tommy Robinson. Unfortunately for John, the lady in question appears to have been a Yaxleyite double agent who was duly recording all of John's drunken gushings for posterity.

Now, that's not very polite, is it? And the lady in question might have already been feeling oppressed at having to wear that body-shaming garb without also having some BBC journalist mocking her from a passing van. (He'd have been braver shouting 'Phwoar!' at the first Shia cleric he saw after that).

And, as MB put it on the Open Thread, "If we applied the BBC's PC rules to John Sweeney we would have to conclude he is being Islamophobic and culturally insensitive here - mocking modest dress in Islamic societies".

Still, I'm rather warming to John Sweeney. Maybe he could change his Twitter handle from: